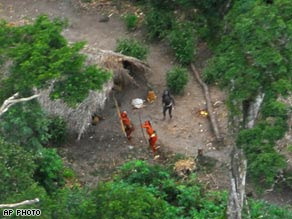 I love this stuff. This is the first photograph showing the first contact with a previously unknown Amazon tribe. It was taken just a few days ago. The tribe members appear to be shooting arrows at the airplane. Little do they know.

What will our tribe share with them? The Spear(e)'s, Britney and Shake? Sylvester Stallone? Versace fragrances for men and women? Wii Archery? Christianity? Scientology? The benefits of laissez-faire capitalism (AmazonWorld, coming Summer of 2015)?

It used to be that the doctrine of Manifest Destiny dictated that it was incumbent upon the white man to "civilize" the rest of the world, and to force the unruly heathen to adopt what was best for them. Hopefully we've learned a few lessons in the meantime. But I wonder what will happen. Here, in 2008, we've encountered people who know nothing of Walt Disney or Hugh Hefner, Jesus Christ or L. Ron Hubbard, George W. Bush or Anheuser -Busch. What will we do?
Posted by Andy Whitman at 12:33 PM

You quote Psalm 19; yes, the creation witnesses to a glorious creator God. That's not the same as knowing Jesus. See Romans 10:9-15.

Indeed, what a challenge for the world to engage this people righteously.

The photo reminds me of a similar photo taken around 50 years ago by a group of guys that included Jim Elliot. Let's hope things work out better this time.

Perhaps what they should know about is Andy rather than Disney and all the rest. Knowing about Andy is sufficient.

Don't you think, Andy, that they should be taught something of Jesus by somebody? If so, how? Just wondering about your take on this (obviously, since I asked the question... duh).

The martians are probably having the same debate about us right now.