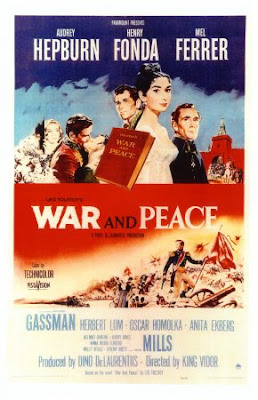 I am slowly, very slowly, making my way through Leo Tolstoy’s War and Peace. It’s a daunting task, one I’ve started before, but this time I’m determined to make it. Still, several factors make this difficult.

First, the names. There are more than 500 characters in War and Peace, most of them bearing names like Anya Dmitriovronsky Putinsvetlanaskayaverarovich (who should not be confused with Anya Dmitriovronsky Rasputinsputnikskaya) and, well, the head hurts within a remarkably short period of time.

Second, the dinner soirees. This was Russia in the early 19th century. It was cold and bleak, and they didn’t have the Internet or superhero movies. So, really, what else could they do but eat and drink? Still, these counts and countesses yammer on about the most inconsequential things, all the while sipping their port and Madeira, curtseying and bowing and scraping and observing labyrinthine and inscrutable rules of etiquette that I don’t begin to understand.

Third, the insufferable meekness and docility of the women. I know it’s wrong to read one’s contemporary culture into a work from the distant past. Russian women of this time weren’t out there in front of the White Palace burning their bras and smoking ciggies and agitating for control of their own uteruses (uterii?) But can we have just a little spark of life from the women? Just a little? Something more than mouselike peeping accompanied by curtseying? Please.

Fourth, the daunting history. Before tackling War and Peace, again, I slogged through a massive history of the Napoleonic Wars. I am as ready as I am ever going to be, and I now understand, sort of, the intrigues that surrounded the assassination of the Duc d’Enghien and Czar Alexander’s abortive alliance with the Prussians. But this stuff is still about as invigorating as reading Livy and Tacitus, but the names are harder to pronounce and remember.

Fifth, the French. As in the language, not the people. I understand that all good, hip, cultivated Russians in the early 19th century spoke French. It was their equivalent of buying Deerhoof and Vampire Weekend albums. But there are times when the French runs on, untranslated, for line after line, as in “Comrade, pass the borscht, and la Police et les Jésuites ont la vertu de ne jamais abandonner ni leurs ennemis ni leurs amis.” My thoughts exactly. Look, those two painful quarters of college French were a long, long time ago. I am going to struggle with anything more complicated than “Frere Jacques, frere Jacques, dormez vous.” It is, to put it mildly, la challenge.

So I’m creeping along, adrift in the peace, waiting for the war, and hoping for some good, bloody action pretty soon. I am sorely tempted to watch the movie instead. I really love Audrey Hepburn, and I bet she sneaks in a ciggie or two while hiding out in the salon.
Posted by Andy Whitman at 11:10 AM

Andy, mon ami, I feel as though I've rounded a bend on a long journey only to have a surprise rendezvous with you. I'm also deeply entangled in War and Peace at present; I've just launched into the fourth and final volume. The women in the story haven't bothered me -- I rather like Natasha and Marya -- but I share your sense of fatigue. Wish me well as I try to finish the book in the next few weeks.

Well, you just made me want to dive right in. I loved Anna Karenina and I got so creepily involved with Crime and Punishment that I have been craving another Russian novel. Maybe not this one? The names and the French get me too. But when I read Cormac MacCarthy, there's a lot of Spanish, and I feel faintly mollified that I can trail along and at least understand that.

Carol, in truth I love Russian literature, especially Dostoyevsky. So I'd recommend "The Brothers Karamazov" or "The Idiot" in a heartbeat. I liked "Anna Karenina" too. But "War and Peace" is a different kind of book. I've struggled with it before, and I'm struggling with it now. I slightly exaggerated some of my reactions, but only slightly. I'm also baffled by Tolstoy's proclivity to interrupt the flow of the narrative with long historical or philosophical essays that just seem dropped in from out of nowhere.

But I'm going to finish it. It's like training for a marathon (except it doesn't involve movement :-)). But if I can do this, I can read any book. Next? James Joyce's "Finnegans Wake."

Thanks for the recommendations, Andy. I'm going to stock up on some books at the library before baby comes. And I know what you mean about those long essays dropped in out of nowhere; remember the long wheat harvesting scenes with the peasants in Anna K? I just about couldn't hang in there. I guess I have a shorter attention span than readers in Tolstoy's day.

Finnegan's Wake? Let me know how that goes. Then maybe you can tackle some Nietzsche, you literary superhuman.

I had to laugh when I read this. My copy of W&P has yet to be fully read for the same reasons. Thank you for articulating these so beautifully! I hate not being able to finish anything, but this is something that I will probably never come back to. Love your article about it, though!

I was going to say it couldn't be worse than Ulysses.

Talk about a coincidence! I just received my copy of War and Peace from Amazon (the new translation by Richard Pevear and Larissa Volokhonsky) because I've been meaning to read it for years, and decided 2008's going to be the year I at least get started on it. (I tried to buy it at Borders, but they explained they don't carry, and won't be carrying the translation until it's released in paperback).

I also picked up the DVD with Hepburn (to watch afterward, of course), partly because it was on sale for six bucks, but also because I'm a big King Vidor fan.

I'll let you know when I get into it.