We all have ‘em. Admit it. You do too. It’s not as big a problem with iPods, unless you happen to share your playlists with your friends. But with vinyl albums and CDs, they’re out there for all the world to see, displayed on the shelves. So if you’re like me, you do what any self-respecting music lover would do: you hide them behind various kitschy knickknacks and brick-a-brack that your wife purchased at vintage stores, and you hope that no one looks behind the lava lamp. Let’s just say that there are certain albums that push the Hopelessly Unhip meter way over into the red.

But look, I’m empowered, I’m strong, and I can take it. No more hiding albums behind the lava lamp. I am Andy; hear me roar. 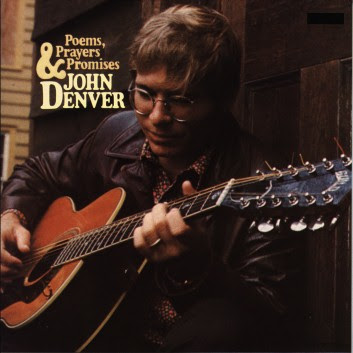 I had a college roommate who looked just like John Denver. He played guitar. He sang John Denver songs, including the one that made all the girls swoon, the one that goes “You fill up my senses like a night in a forest.” God, I wanted to puke. You fill up my nostrils like the stench from a rotting corpse.

And for a long time I hated John Denver, the tree-hugging muppet. For a while there he had his own television show, just like Tony Orlando and Dawn. Both shows sucked. I secretly rejoiced when he was arrested for DUI. I wanted him to be eaten by a shark when he was out there diving with Jacques Cousteau. But a few years ago, long after his death, long after the college roommate jealousies had disappeared, I pulled out Poems, Prayers and Promises. That’s the album with “Take Me Home, Country Roads.” I like that song, even if the Blue Ridge Mountains and the Shenandoah River are in western Virginia, not West Virginia. That’s the album with “I Guess He’d Rather Be in Colorado.” I listened in Ohio and thought he had a point. There are a few other good songs as well. I now proudly display this album on the shelf, for all the world to see. 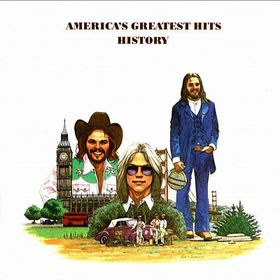 They were CSN&Y Lite. Instead of writing about four dead in Ohio, they wrote about muskrats in love. “Don’t cross the river if you can’t swim the tide,” they told us, sensible water safety advice that I wanted to withhold from John Denver. They had the laidback hippie SoCal sound of the early ‘70s, they harmonized beautifully, and they wrote a bunch of inane pop tunes.

None of the official releases can hold up. But I’m telling you, this Greatest Hits album is chock full of inane, sweet goodness. The lyrics are inconsequential, unless you think “Oz never did give nothin’ to the Tin Man that he didn’t already have” borders on profundity. But “Lonely People” still sounds like the best song Neil Young never wrote, “Ventura Highway” really is a laidback hippie anthem, and “Sister Golden Hair” still holds a sentimental spot in my heart, mainly for the girl who got away from the guitar-playing clutches of my John-Denver-loving college roommate. 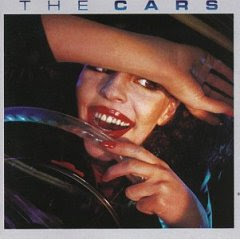 The Cars – The Cars, Candy-O, Panorama, Shake It Up, Heartbeat City

There is a school of music criticism that holds that you can’t be any good if you sell 10 million records; that popularity, in and of itself, is the death knell for creativity and innovation because the great unwashed masses don’t know jack about quality.

You know what? I don’t care. The Cars sold millions of records. They’re still a mainstay on Classic Rock radio. And the five-album run they had from the late ‘70s through the ealry ‘80s can hold up against anything released during that time period. Elvis Costello and Talking Heads get all the critical acclaim, but The Cars took New Wave and turned it into the perfect music for summertime cruises, releasing a couple dozen almost perfect pop tunes full of massive hooks, anthemic choruses, Ric Ocasek’s deadpan imitation of Lou Reed, and inventive guitar/synth interplay. Panorama is the only semi-weak link here, and it’s still decent. Everything else is very good to great. It’s time for a critical reevaluation of this band.
Posted by Andy Whitman at 10:36 AM

thanks for sharing yours!!

The Cars were the first band I saw live. Ok, it was really the opening band XTC.

Guilty pleasure: Petula Clark. Marketed as a pop princess when she was in her early thirties. She's awesome.

my guilty pleasure are conspiracy theories.

can you write and tell me what makes vampire weekend 'afropop'? is afropop now the label in the music world like lupus? if they don't know how to categorize the music- it's afropop. it doesn't sound like that to me... but i don't know much. you on the other hand- your the shit when it comes to music. so educate me.

Maureen, here's my conspiracy theory on Vampire Weekend and "Afro-pop."

I think music reviewers/critics receive far too many albums to actually listen to them all, so I think they wait for that first brave reviewer/critic to write something, and then they cautiously follow suit, offering minor variations on a theme. So if somebody crowns Vampire Weekend with the "Afro-pop" tag, then a bunch of critics get in line and act like they, sure, hear all the Fela Kuti and Thomas Mapfumo influences. It usually works out fine unless the first critic doesn't know what the hell he/she is talking about.

For what it's worth, I don't hear much "Afro-pop" in Vampire Weekend, either.

I'll bet you that there will be one or two reviews out there that reference Walter's debt to South
African mbaqanga or something.

I love The Cars. I am hoping that there is a reissue campaign for those albums at some point.

Also, have you heard the new Firewater disc yet? Caught a couple of tracks earlier today and my interest is peaked...

Quite an interesting story about the making of it as well....

Gar, the new Firewater album is fabulous. I wrote about it in more detail right here: http://www.pastemagazine.com/blogs/whitman/2008/03/todd-a-international-punk.html

i played Poems, Prayers and Promises over and over in the dorm on my automatic changer turntable. Your post just put the title song back into my head -- a happy bit of nostalgia on a Monday night. Thanks.

I loved John Denver when he was young. He will always have a place in my heart.
He had a sense of wonder.
Why am I reading this blog, I ask myself!!! Again!!!