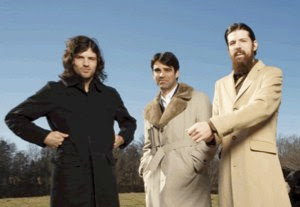 You can have your Coachellas, your Bonaroos, your Austin City Limits Festivals. And you can swelter with 200,000 other people if you want to, and sit half a mile from the stage and watch a Jumbotron screen and pretend like you're having a musical epiphany.

Me? I'm heading to the hills this weekend for the Nelsonville Arts and Music Festival, a nice, cozy three-day celebration of, well, arts and music, where you can get right up next to the stage and hang out with the musicians afterward if you want to.

That's the Avett Brothers pictured above. They're probably the big-name headliners of the festival (along with Akron/Family and Bettye LaVette). See? I told you. But in my world those folks are some pretty great musicians, and the prospect of seeing them along with a couple dozen more artists who roughly conform to the Alt-country/folk/bluegrass template makes me really happy. There'll be Tommy Ramone, who used to be in The Ramones, playing punk bluegrass. There'll be Southeast Engine, by far my favorite semi-local band, and the best under-the-radar indie rock band I bet you've never heard. There'll be Justin Townes Earle, whose dad Steve did him no favors by dubbing him "Townes" and passing along his last name. But Justin does just great on his own, and I'm looking forward to hearing his old-time honky tonk music.

I'm going to pick up my daughter Rachel at Ohio University, eat some great Indian food (because what's a great country/folk/bluegrass festival without a little Lamb Vindaloo?), and then head up to Nelsonville for some father/daughter bonding time, yee haw. I'm looking forward to it.
Posted by Andy Whitman at 9:45 AM

The Indian place down the street from the Skull is good, but Salaam (in the alley up the hill and east of the Donkey) is better.

The Indian place I'm thinking of is on W. Union (Indian Star, maybe?). It was amazing. Salaam is very good too.

It's interesting to know there's more to Nelsonville than Hocking Tech, which I thought was its main claim to fame. Along with the Paul Bunyan Show, which is apparently now defunct. It was on my list of 1,000 things to see before I die.

Note to Chamber of Commerce: I am available for PR work if needed.

Rocky Boots are made in China.

The Railroad gets stolen by 12 year olds along with the occaisional ferrying of schoolkids and drunk artsy types.

Actually, Final Fridays are a good time, as well as Stuart's Opera House.