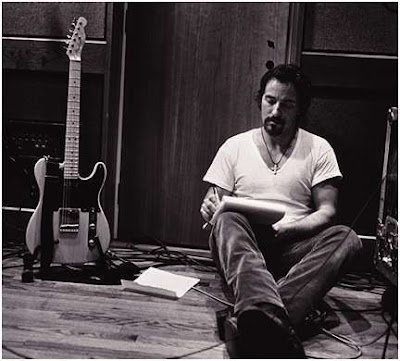 If all goes well ("if" being the operative word here) I will be signing a book contract within the next month or so and spending virtually every free moment of my late summer and fall working on a book about Bruce Springsteen. It could all fall through, so I'd rather not reveal any details at this point, but it's also exciting, and it looks very promising. The preliminary discussions with the publisher have gone well. I like them, and they appear to like me. We'll see what happens.

I don't know Bruce Springsteen. I met him very briefly, a long time ago, and shook his hand. He's spoken precisely two words to me: "Thanks, man." But like a lot of obsessive Bruce fans, I feel like I know him, and his songs have connected in ways that go deep down, and that consistently remind me of important truths about what it means to be a man, and alive to my family, and the town I live in, and the world I live in. I think he's the best and most important songwriter of my generation.

I'd have a difficult time naming my favorite Bruce Springsteen song. So maybe I should write a book about a bunch of them. That would be nice. Bruce has been a lot of things -- romantic hoodrat in a leather jacket, rock 'n roll icon, folk protest singer. And husband and father. So I'm not sure if this one is my favorite, but it's the best damn gospel song of the '90s, even if Bruce doesn't know it, and it's way, way up there in the Springsteen stratosphere:

Well now all that's sure on the boulevard
Is that life is just a house of cards
As fragile as each and every breath
Of this boy sleepin' in our bed
Tonight let's lie beneath the eaves
Just a close band of happy thieves
And when that train comes we'll get on board
And steal what we can from the treasures of the Lord
It's been a long long drought baby
Tonight the rain's pourin' down on our roof
Looking for a little bit of God's mercy
I found living proof
-- Bruce Springsteen, "Living Proof"

That's from a 1992 album called Lucky Town, which was a critical and commercial bust. Many people view it as Bruce's worst album. But I'm a better human being every time I listen to that song. Sometimes this faith business strikes me as absurd. I'm just one screwed up guy living on a planet of six billion people on one of the more obscure stars off in a corner of an inconceivably vast universe. I feel pretty insignificant, and I need all the mercy I can get. And I've seen living proof, too. I can't wait to write about that song, and many others, in more detail.
Posted by Andy Whitman at 9:01 AM

Best of luck with the book deal.

That is great news, Andy. Let me say this: if you do write a book on Springsteen, I will certainly buy it. I don't know a great deal about Springsteen's music, but have been wanting to explore it, and I can't imagine who I'd rather have as my guide.

i'm in the process of trying to pitch continuum on writing a 33 1/3 on separation sunday. not much headway so far actually...i hear the series may be closing. ah obsession!

Wowee! Congratulations! I really hope that all goes swimmingly for you. That is such a confirmation of your talents.

that's terrific andy! hope it works out because i'm already looking forward to reading it!

Thank you so much for posting those lyrics today, Andy.. they really met me right where I am.

God bless you and this book deal.. I'm already excited to read it!

Way to go, Andy. "You're pulling outa here to win."

It always seemed to me like the downcheck on Human Touch and Lucky Town had as much to do with Bruce-backlash as anything else; I found both albums to have plenty of good material.

I've long hoped someone who lives a life of faith would interview Springsteen or examine his music; although I don't know if that's the thought in your mind for the book it'll inform my perspective when I read it. Probably help me add another couple Springsteen sermons, in any event ;-)

Congrats. I couldn't think of a better person to write that book.