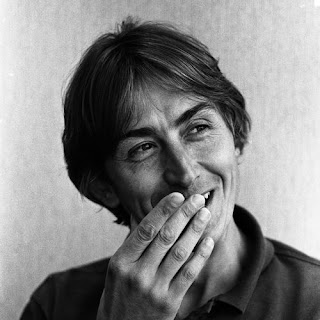 There are certain songs - Bill Evans' "Peace Piece," Van Morrison's "Listen to the Lion," and this one  - that serve as my worship music. I have no idea of the metaphysical views of the songwriters, and they may or may not have intended them as spiritual succor. No matter. They work that way for me, and I'll take them over the entire genre of contemporary Christian music that attempts to scratch that itch.

Talk Talk, the band heard here, were the most unlikely of contemplative worship heroes. For several albums in the early-to-mid '80s they were a standard-issue synth-pop band, and they made a lot of money and wrote a lot of hits with their bleeping and boinging. Then they steered the sleek, shiny car right into the ditch. The last two albums they made, "Spirit of Eden" and "Laughing Stock," from the tail end of the 1980s and the dawn of the 1990s, respectively, were unlike any music I had ever heard. They were pensive, ruminative, deeply searching.

Mark Hollis, the singer and songwriter, and the force behind the wrecked car in the ditch, died today, just short of his 64th birthday. If you listen to him and allow him to crack your soul wide open, you might understand why I feel the need to write, to honor him, to mourn his loss.

https://youtu.be/tSg2OIFum3o
Posted by Andy Whitman at 6:19 PM No comments: