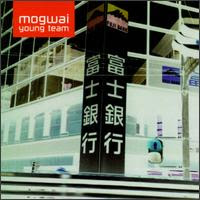 I have a love/hate relationship with Mogwai. The whole from-a-whisper-to-an-ear-splitting-shriek approach of post-rock is sounding a little tired to my ears these days, and Mogwai hasn't done much to keep my interest over their past couple albums. But give credit where it's due. Young Team arrived in 1997, at the very forefront of the post-rock movement, and heavily distorted guitars had never sounded so unspeakably lovely and grating, often within the same song. Quiet, pastoral piano interludes are punctuated by shards of sheer noise, scraps of found conversation float in and out of the mix, and the guitars simply sound massive; no more so than in the newly remastered version of the album. The overhaul was needed, and this album sounds fabulous.

This is a highlight of '90s music, and if you missed it in '97, now would be a great time to discover the pleasure and the pain that is Mogwai.
Posted by Andy Whitman at 2:14 PM