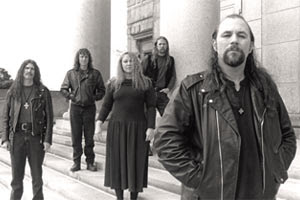 I can still recall the surprise with which I greeted the first Resurrection Band album Awaiting Your Reply. It was 1978, and I was already losing my interest in CCM. I tried. Really I did. I had thrown away the Black Sabbath albums a couple years before, and had diligently done my best to incorporate the sounds of Evie, Honeytree, and Phil Keaggy into my life. Phil was a great guitarist, but he didn't exactly rock. Larry Norman more or less rocked, and was great, but he was still missing that special oomph that I had come to expect from my favorite secular bands. I thought that maybe the balls-to-the-wall gene was supernaturally removed upon Christian conversion. But then I listened to Awaiting Your Reply, which most emphatically rocked. It rocked like Led Zeppelin rocked. And I was amazed by what I heard. Here were Christians who wrestled with sin, and who took on thorny, complex social issues. And who, let me say it again, rocked.

I've been listening to the 4-CD Rez Band box set/career retrospective that will be released in another month or so. I'm familiar with some of this music, unfamiliar with a lot of it because the CCM era officially ended for me in about 1984, and I missed the band's last ten albums or so. And if it needs to be said that the band never really progressed beyond its original overamped assault, it should also be noted that there are few things in my life that provide more pleasure than an overamped assault based on blues licks and AC/DC power chord riffage. Glenn Kaiser handled the AC/DC end of things, and unleashed a blood-curdling banshee wail on almost every song. He's a strong contender for the Robert Plant Banshee Wail Hall of Fame. Stu Heiss handled the jaw-dropping solos and guitar pyrotechnics. And Wendi Kaiser simply sang like Grace Slick, no more so than on the cover of Jefferson Airplane's Summer of Love chestnut "Somebody to Love." These songs grapple with real life, in all its joy and ugliness. They lift up Jesus. And they rock. Wow, do they rock. That's a holy trinity I'm willing to celebrate any day of the week, Sabbaths included.
Posted by Andy Whitman at 1:17 PM

i saw them in Switzerland in the early 1990's sharing the stage with Idle Cure. they rocked then too. Glen definitely had gifting as a pastor then as well, challenging the people there to even move to another country if they couldn't find a church to be a part of.

rez band was the first concert i ever went to. petra opened for them at vets. it was some time around '83/'84. as soon as i saw them live, i was hooked...even at such an early age. i knew every song up through "silence screams", and then kind of lost interest (can't quite explain why, though). so thanks for the walk down memory lane!

Amen Andy! I just recently picked up Awaiting Your Reply on CD after many, many years of absence on vinyl. It was one of the best reunions I've had in years; I still knew every lyric and every lick by heart. And though I was prepared for the music to have aged ungracefully, I was struck by how well it had held up all these years - far better than some of the bands you mentioned. I suppose some of that comes from lyrical depth that went beyond drugs, sex, and rock & roll.

I found this LP amongst my dad's collection. Even at 14 years old (17 years ago), I liked it a lot. I tried to enjoy a couple other Rez albums but couldn't do it. This one, however, stands in greatness.