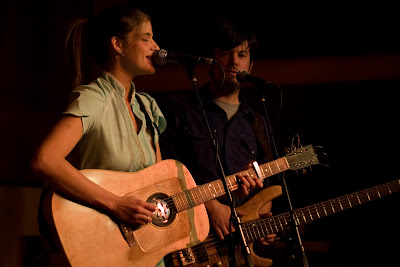 One of the many highlights from last weekend’s Trinity Arts Conference was the opportunity to see and hear Reva Williams and her band Gretel. I wasn’t familiar with Reva’s music before the conference. But after a four-song teaser on Thursday night, and then a full concert on Saturday night, I am a Gretel convert.

The music business is a strange world. People do karaoke to old Motown and Rod Stewart songs on American Idol and become instant stars. Meanwhile, hundreds of deserving singer/songwriters and bands toil in virtual obscurity, waiting for the big break that may or may not ever arrive. I won’t flatter myself with the illusion that I have any kind of clout to make or break anybody. But I do know that Reva and her band are deserving of that big break, and that the world would be a better place if that happened.

I’ve seen hundreds of concerts over the years; okay, over the decades. And this was one of the best I’ve seen. Reva played guitar and banjo, and sang in a powerhouse raspy howl of a voice that reminded me of Lucinda Williams. She writes songs about being a fucked up human being in love with Jesus some days and just in love with herself other days. Sounds about right to me. Her poetic imagery was startling; beautiful, and disturbing and uncomfortable. Melissa Myers played keyboards, snare drum, and saw (!) and added sweet harmonies that perfectly complimented Reva’s scuffed alto. Bass player Phil DePertuis filled the Hansel role and added harmony vocals. It all left me with a big, shit-kickin’ grin on my face.

There are two albums for your listening pleasure: Unreturnable Dirt, from 2005, and a new 6-song EP called The Meteorite. I think Reva’s getting better, so I’d actually recommend the EP if I had to choose. The songs on Unreturnable Dirt are just fine (actually, a lot better than fine; they’re close to brilliant), but the production and arrangements are a little more subdued than what I heard in concert, and come a little closer to the standard singer/songwriter fare of folks such as Dar Williams. The EP is more raw and adventurous, with woozy clarinet threading through the proceedings and some very unstandard songwriting structures. I like it a lot. And the new songs I heard this weekend, and which have yet to be recorded, convince me that the best is yet to come. There’s a song called (I think) “Jesus” that I can’t wait to hear again. It’s the kind of desperate hymn that people who are out of hope write. So buy Reva’s music and give her some hope. We could all use that these days. And you just might find a smidgen for the future of the music industry as well.

Thanks for yet another recommendation, Andy. You rarely lead me astray. I finally got around to checking out Son Lux, and I' loving it.

i second your sentiments heartily. I was at TAC as well, and was as impressed as you were. I'm a convert as well!

I just realized that I compared Reva Williams to Lucinda Williams and Dar Williams. For the record, she did not sound like Victoria Williams. Or Andy Williams.

Gretel is absolutely brilliant. They are making the world a better place to live. May their tribe increase. One of the things I miss most about Boston is getting to see them perform those redemptive bar shows on a regular basis. Reva's lyrics are genius. Literally. And Mel and Phil intuit music in a way very few other performers can. Love them. Thanks for this. And no, she doesn't sound like Andy Williams. :)
This is my first time to your blog. I'm going to have to check out your other recommendations! And to the guy who said he liked Son Lux, he should check out Katie Chastain also of Boston/New York whose band he's been playing in recently. Also brilliant, both sonically and lyrically.

Dammit, Andy, you're going to make me broke. Last week, I went and bought some Southeast Engine on your recommendation and now I'm sending Gretel my money. Oh, and thanks!