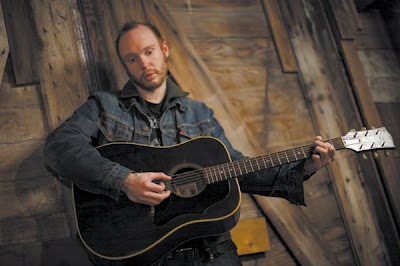 There are ten thousand guys with guitars and gravel voices, plying their trade in bars and coffee shops, waiting their turn to be the next Steve Earle.

Steve shows no signs of relinquishing the throne, so the waiting may be prolonged. Nevertheless, there are plenty of contenders who are worthy of celebration. Chris Knight keeps making superb albums full of mournful, soulful little ditties about coal towns after the coal is gone, smalltown losers and roustabouts who make trouble just because it's so damn boring otherwise. And Scott Miller and his old band The V-Roys have made a handful of the best Americana albums this decade, singing songs about those same smalltown hoodrats who look for salvation behind the wheel of a car and from a Bruce Springsteen 8-track playing in that same car.

Kasey Anderson's latest album The Reckoning needs to be added to that list. I've had Kasey's album for about a year now, and I liked it after a couple spins but didn't really pay much attention. Kasey sounds like Steve Earle. Yeah, yeah, yeah. We've got a lot of those. Next. But it's one of those albums that has snuck up on me, primarily because of the quality of the songwriting. Here's the way one of his songs starts out:

Somebody said State Street's covered in ashes
I didn't ask for a name, I knew it was you

Those are the best opening lines I've heard in a while; mysterious and dangerous, pulling you in to the narrative from the first word. If this music thing doesn't work out, Kasey may have a career as a short story writer to fall back on. But the music is just fine. If there are a couple too many generic good ol' boy party anthems ("Wake Me Up," "Hometown Boys"), there's also a literary approach that is formidable and wonderful. Who else starts off an alt-country album with an almost 6-minute atmospheric spoken word piece? You'd better be able to write well to pull that off, and Kasey writes well.

So chalk up The Reckoning as one of those albums that sneaks up on you from behind, probably a lot like that guy who started the fire on State Street. It's a contender for my "Best of 2008" list, even though it came out in 2007.
Posted by Andy Whitman at 11:17 AM