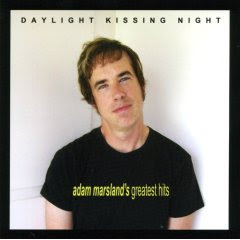 I don't know Adam Marsland's previous music, so I'm assuming that Daylight Kissing Night: Adam Marsland's Greatest Hits, the title of his latest album, is intended ironically. Marsland was the leader of L.A.'s Cockeyed Ghost, who reportedly recorded five good albums in the '90s. I wouldn't know. Labels imploded, distribution fell through, radio airplay was non-existent, etc. It's an old and all too familiar story. He then embarked on an under-the-radar solo career (including an intriguing album of Wilson covers -- Dennis and Carl only; no Brian), quit the biz, and has now re-recorded a batch of his old songs, paired them with a couple new ones, and, in a bit of optimistic hubris, packaged them as Greatest Hits. In your dreams, pal.

But maybe, in a more just world, dreams come true. This is the best power pop album I've heard this year. And if the 20 songs here have been cherrypicked from a catalogue that may not be quite as strong overall (again, I wouldn't know), it's worth noting that there is absolutely no filler here, and that for 70 minutes the singalong choruses, the power chords, and the witty, literate songwriting don't let up. The multi-tracked harmonies are a constant, but otherwise Marsland mixes it up pretty well, pulling in influences from Matthew Sweet, Ben Folds, Cheap Trick, Fountains of Wayne, and Weezer. The guitars are loud, the harmonies are sweet, and Marsland's melodic gifts are on constant display. It's all good, and it's all been done a thousand times before. But what ultimately wins me over is the songwriting -- by turns caustic, desperate, and funny -- paired with those sunny melodies and loud guitars. "My Kickass Life" takes irony to another level, transforming sadsack sentiments into a pep talk, while "Burning Me Out (of the Record Store)" is the sordid tale of, you guessed it, labels imploding, distribution falling through, non-existent radio airplay ... and the sheer joy of making music because you love it. On WHIT, my own private radio station, it's #1 with a bullet.

Oh, and in a serious bid to turn these greatest hits into actual hits, Marsland and his label are offering this album on Amazon for about six bucks. You should buy it and give the guy a break. There are no distribution problems, either.
Posted by Andy Whitman at 9:57 AM

I've been his "friend" at myspace for quite some time, and he actually posts comments back to me(I often use his songs as my profile music at myspace.) I know that's not really a big deal, but considering how many artists have "friended" me, he's the only one who actually interacts. I think that's cool.

I intend to see him live if he EVER gets out toward Boston. Great to see you giving him some time here.