Southeast Engine -- From the Forest to the Sea 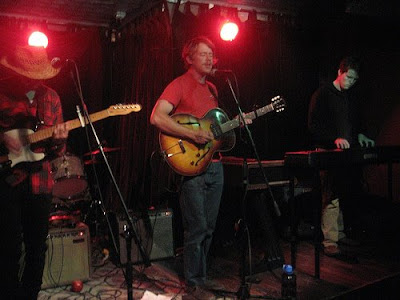 I've been listening to Southeast Engine's new album From the Forest to the Sea, due out in February on Misra Records. Musically, the band has punted the alt-country influences entirely, emerging with an amalgam of folkie gospel, angular indie rock that recalls Pavement and Sebadoh, and some wondrously cheesy circus organ/calliope that reminds me of the work of Steve Nieve, the keyboard guy from Elvis Costello's Attractions. Oh yeah, there's some honky tonk piano in there, too. Lead singer/songwriter Adam Remnant's raw, soaring vocals are double- and triple-tracked, and there are times, particularly on the closing track, when he reminds me of a choir of Ralph Stanley's. Yes, that's a very good thing. So we sort of end up with Appalachian indie circus music.

Lyrically, Remnant reminds me more and more of folks such as Mark Heard, David Bazan (Pedro the Lion), and Bill Mallonee (Vigilantes of Love). By that I mean there is a clear Christian context in which these songs emerge, and there is biblical imagery galore, but these are songs of struggle and doubt. There are songs about knowing the right thing to do, and doing the wrong thing anyway. There are songs about losing the thread, the vision that connects our souls to all that is worthwhile and meaningful. There's a song in which Remnant, apparently as part of some mystical vision, ascends towards the heavens to grasp the hand extended toward him, only to be slapped back to earth and told that it's not his time yet. Hoo boy. It's either incredibly gutsy or incredibly foolish to write stuff life this, but I'm inclined to go with the former. But mostly these are songs made by and for screwups. Since I seem to fall into that camp, I take some solace in knowing that somebody's turned my life into a musical.

It's a wonderful, and wonderfully strange, album. I'm sure I'll be writing more about it as its official release approaches.

Edit: Blogspot tells me that this is post #666 on my blog. Should I be worried if Southeast Engine plays at the Obama inagural?
Posted by Andy Whitman at 9:16 AM

Dammit! Because you're a celebrity, you get all the good advance copies. And new SEE is three months away for the rest of us. Lucky, lucky, lucky.

I just saw the pic you posted up and it brought tears to my eyes reminiscing in memories 12 years ago when I myself once had a band as well..
We played in the basement/garage, we performed in talent shows/pubs, we did everything right, we got a record deal with some small time corp, but now I still remain a plumber in misery. Hey ya'll, pursue your dream, dont let it fall out! Make your dream come through because only you can make it true :)