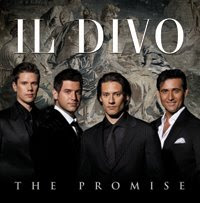 Are we not men?, the smouldering cover asks. No, we are Il Divo, they proclaim, better than those "Whip It" nerds from Akron, better and more numerous than the three (old, fat) tenors, we are four young James Bonds who can, get this, sing opera AND Abba!

Which they do on The Promise. From the same marketing masterminds who gave us The Backstreet Boys and American Idol comes installment 5 of International Sex Appeal. And let's just be honest and say that it works just fine as international sex appeal. The pre-fab group is made up of tenors Urs Buhler (Switzerland), Sebastien Izambard (France), and David Miller (U.S.A.) and baritone Carlos Marin (Spain). They are a multi-cultural, mult-ethnic stud farm, programmed at the factory to facilitate love in all its carnal and romantic incarnations, and if this album, candlelight, and a little Merlot doesn't do the trick, you're probably hopeless.

The title track (actually "La Promesa" as billed on Track 2 because, hell, it just sounds more smouldering, but you can't put that on the album cover because it would confuse all the Wal-Mart shoppers) is typical; over-the-top emoting sung in Italian. It's what these guys do, although they toss a little Spanish and French into the mix to keep it exotic and interesting. There's a hyperventilating cover of Leonard Cohen's "Hallelujah," a song now so ubiquitous that I'm waiting for it to show up on Maxi-pad commercials. There's "Amazing Grace" with bagpipes, just like in my old Presbyterian Church. And yes, there's Abba's "The Winner Takes It All" sung in Italian, a sort of awkward rockin' aria that leaves me, and seemingly the four studs, utterly baffled.

It is what it is, music for babymaking, dripping in romantic schmaltz, and my prediction is that hundreds of thousands of PBS-watching, Merlot-sipping suburban women will flock to the call. Guys, get ready. Simon Cowell (yeah, that Simon Cowell) and David Krueger (producer and engineer for The Backstreet Boys) have found their backdoor men. Cha-ching!
Posted by Andy Whitman at 9:01 AM

I'm glad I quit my job at Borders, since the Il Divo hoardes will be in store, too lazy to fetch it for themselves, expecting the store "girls" to hunt it down for them.

You are right on the money about the buyers! (They also buy Manilow, Clay Aiken, and Josh Groban.)

I'm waiting for their rap cross-over album, "License to Il."

You crack me up. I want to buy this music and like it, because I have a friend who likes opera and has more class than me, and does. But I just can't make myself put down the money. There's something plastic about the image.