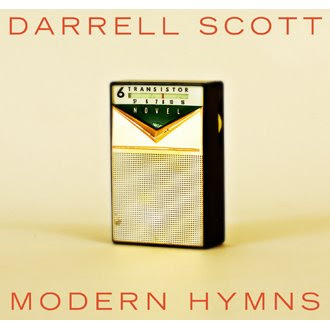 Darrell Scott's Modern Hymns gets my vote for Best Bluegrass Album of 2008. Here "bluegrass" is used loosely, and is a catchall term for music anchored by acoustic guitars, fiddles, and dobros. It certainly doesn't fit within the fairly narrow strictures of the genre. But Scott, best known as a songwriter (Tricia Yearwood, Dixie Chicks, Garth Brooks) and sideman (Steve Earle) is a soulful, nuanced singer, and here he lends his pipes to songs written by pretty much the whole Sixties/Seventies Folkie Pantheon -- Bob Dylan, Joni Mitchell, Gordon Lightfoot, Paul Simon, Leonard Cohen, John Hartford, Guy Clark, Mickey Newbury, and Kris Kristofferson, for starters.

The resulting covers are more than reverent homages, though; these are fresh takes on songs you know, and the songs open up in new ways because of the instrumentation and Scott's phrasing. Paul Simon's "American Tune" -- an elegiac, heavily orchestrated lullaby in its original incarnation -- emerges here as a quietly mournful lament, the song of a weary coal miner rather than the faintly grandiose merger of Bach and the Brill Building. It's a great song either way, but it's all the more starkly beautiful in Scott's hands. Aided and abetted by the likes of Alison Krauss, Mary Gauthier, Tim O'Brien, Del and Ronnie McCoury, Danny Thompson, and Sam Bush, Scott sings simply, soulfully, and beautifully, and the rest of his talented cast adds the filligree. It's a lovely album, easily one of the highlights of my musical year.
Posted by Andy Whitman at 11:24 AM