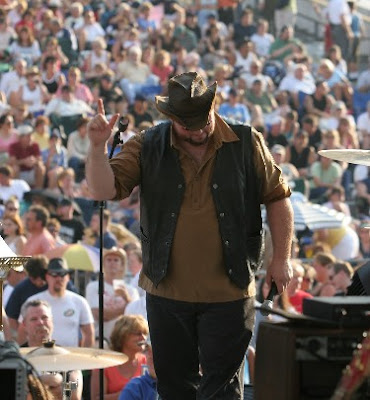 It's a long story, the way a preacher's son from Kentucky by way of New York and Nashville and alt-country music's brightest lights winds up in an insurance building in the middle of downtown Columbus, Ohio.

I met Christopher Wyant, AKA Hayseed, about a year ago at a gathering of Columbus artists. He told me he was a singer and songwriter. Cool. I've met a thousand of 'em. Everybody's a singer and songwriter. He dropped off a couple of his CDs, and when I listened to them the next day my jaw dropped. He sounded like George Jones. He wrote songs like John Prine. And he had people like Lucinda Williams and Emmylou Harris along for the ride, singing gorgeous harmony vocals.

It turned out that we both paid the bills by working in the same insurance building in downtown Columbus, Ohio, so in the weeks and months ahead I got to know him. I heard his story. I listened to his hopes and dreams. And he turned out to be a gentle, compassionate, good man who just happened to sing like George Jones and write songs like John Prine.

As much as I like him, he needs to get out of Columbus, Ohio, and I hope he does. In the meantime, he's playing a concert tomorrow night at 8:00 at Rumba Cafe, 2507 Summit St. in Columbus. If you're in the area, stop by. You'll be in for a treat. And say hello to me, too.
Posted by Andy Whitman at 8:38 AM

Thanks for this, Andy. It was a pleasure to see you and Kate.