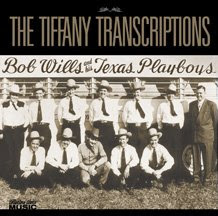 Only a music geek would get excited about the release of a batch of old tunes recorded in obscure radio station studios in Oklahoma and Texas in 1946 and 1947. So I'll let my geek flag fly. I know and love Bob Wills' music, albeit not to the level of the true fanboy. But I'm about to be indoctrinated. The massive, 10-CD box set The Tiffany Transcriptions is winging my way (or, more appropriately, I hope, being transported on some big rig). When it arrives I'll have 150 tunes to digest, many of them the bedrock "western" part of "country and western." Eventually my thoughts will end up in Paste Magazine, but in the meantime I'll have a lot to take in. If you see me attempting the occasional Texas Two Step, you'll understand. You might mistake it for random, otherwise inexplicable spasms, but at least you'll know the intent.
Posted by Andy Whitman at 12:34 PM

Somewhere between where it came from and its final destination, I can see the ghost of Jerry Reed ferrying the box set your way in the great astral big rig. More likely, however, it's on a plane. Sadly. Can't wait to read about it!

I'm excited, too. Those tunes aren't just western -- they form part of the foundation of rock'n'roll, as you'll learn as you get acquainted with Lester "Junior" Barnard, whose guitar is featured on many of the Tiffany Transcriptions.