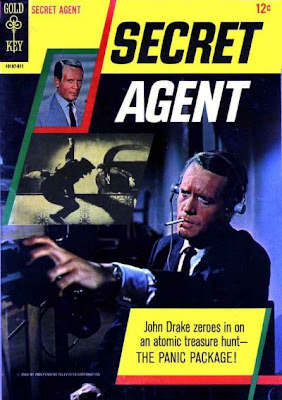 Swingin' on the Riviera one day
And then layin' in the Bombay alley next day
Oh no, you let the wrong word slip
While kissing persuasive lips
The odds are you won't live to see tomorrow
Secret agent man, secret agent man
They've given you a number and taken away your name
-- Johnny Rivers, "Secret Agent Man"

In 1965 I was ten years old, and I wanted to grow up to be an international man of mystery. This was chiefly due to the influence of the television show "Secret Agent," which featured Patrick McGoohan as ultra-cool spy John Drake. Drake, top operative for shadowy government agency M9, almost never used a gun. He used a camera hidden in his tie pin and a tape recorder that doubled as an electric razor (for some reason, criminals never questioned his need to shave in the middle of the nefarious plotting to blow up the Eiffel Tower). And he always, always, always undertook missions involving national or global security. I thought of it as a very noble future career: save the world from sinister terrorist cells, earn the thanks of grateful democracies, and wind up with the pretty girl.

A couple nights ago I pulled out Johnny Rivers' Greatest Hits, and there it was again: the theme song to the TV series, called, naturally enough, "Secret Agent Man." Every person who played guitar in the 1960s has played, or tried to play, this song at one time or another. Even if you think you don't know it, you do. It's one of the classics of the era, and has been used in countless soundtracks since, including the Austin Powers spy spoofs. What I had forgotten is that the song was never really intended to be a song at all. Rivers and his band recorded all of 58 seconds of music, a quick tossoff meant to be played over the opening credits of the TV series. It was months later, when radio listeners began bugging DJs with requests for "that secret agent song," that Rivers went back in the studio and recorded the version we know today.

I listened to it at 53, and wanted to dive behind the futon, take pictures of my den with the camera hidden in my hearing aid, and abscond with my wife to the French Riviera. It's such a great song. Johnny Rivers was a great R&B and rock 'n roll singer, unjustly slagged because he never achieved that special countercultural late '60s hipness factor. But he never improved upon "Secret Agent Man." I'm not sure it's possible to improve upon it.
Posted by Andy Whitman at 1:03 PM

Johnny Rivers always moved me, but I always associated that song with "The Man From U.N.C.L.E."!
"Secret" had that cool guitar part, too, and my friends and I used to do that dance, The Swim, to the song.
He surely was slagged as uncool, and ended up having another fine song associated with that fairly lame "Midnight Special" show. Yeesh!
"Summer Rain" is still a favorite song of mine.
Ahhh, the joys of being middle-aged!