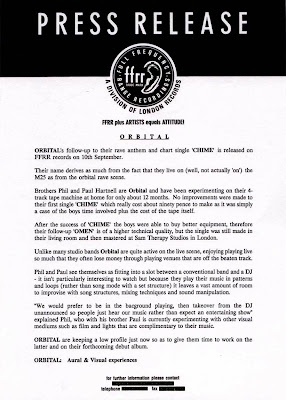 Writing a press release for some little-known artist or band is a thankless task, and I salute the music publicists who do it well. These are folks who strive mightily to get my attention, and sometimes succeed.

Here's the reality that I (and they) deal with. I receive 20 to 25 new CDs per week, four or five per day. I work a fulltime job that has nothing to do with music (this gig is good for pizza money, but it's far from a living). I have a wife and kids. I have interests and friends outside of music. Given all that (and it's the world of most music critics), publicists routinely have to invent new and striking ways to capture my attention. Here are a few of my favorites, with some examples (perhaps slightly exaggerated) to give you a feel for the appropriate technique.

When in doubt, claim life-altering properties for the music.

Band X will change the course of your life. No, really, Imagine your life before Band X: bored, enervated, prone to creeping ennui. Even your mother ridiculed you. Now imagine your life after Band X: spunky, witty, without those annoying coffee and nicotine stains on your teeth.

Pull out the trivia trump card whenever possible. No one will know what the hell you're writing about, but you'll be able to feel better and more smug about yourself.

These are real. I swear to God.

"Wonders," a track on "Mothertongue," includes the ethereal voice of Helgi Hrafn Jonsson, an Icelandic performer, singing fragments in English from "The Travels of Sir John Mandeville," a sonnet about sea monsters, composed by King James I; and a 1619 complaint against Thomas Weelkes, the composer and organist at Chichester Cathedral, for his repeated drunkenness. "The Only Tune," also on "Mothertongue," is another Muhly collage -- a dismantled traditional English song about a violent sororicide, delivered with affecting flatness by an American folk singer named Sam Amidon, to the accompaniment, variously, of a sampled Farfisa organ similar to that used by Philip Glass in "Music in Twelve Parts," a pair of butcher's knives scraping against each other, a recording of whistling Icelandic wind, and the sound of raw whale flesh slopping around a bowl."

"Lion Land" (the name of the album) is basically an e-card sent to grandma back in Africa from a tribe of lions on their first visit to Disneyworld/Kissimmee St. Cloud Florida. Damns and whirlpools of itchy frightening frequencies tenderly romance lyrics that orbit the worlds of ecstatic parochial school patriotism and junglebook moral codes. Industrial beats are stocked by hems of cinematic synthesizers suckering you, as a sunset might, into having an emotional moment. Quinn's feral musicianship flows freely through every anthem and a warm, howling wave of screams and whispers and pounding drums will feel at times like fuzzy hugs, at other times feel like the result of letting a blind lion cub into the kitchen to invent a new recipe for lasagna."

I have an emotional moment every time I read this quote. Sadly, although plenty weird, this press release really didn't do it for me. This is because I'm not sure that I want to hear the musical equivalent of blind lion cubs in the kitchen, inventing a new recipe for lasagna. Manicotti, maybe. Or giraffes. In the conservatory. With the candlestick.

""In Old Yellowcake" utilizes imagery of the destruction of Fallujah. This is coupled with the album's overall narrative of Mary Todd Lincoln as Queen of Florida, with her blimp armies having attacked Pitcairn Island, where Fletcher Christian's son Thursday emerges as a resistance icon, before the record's grand end and subsequent denouement."

Now this one works for me. First, there's a historical (Mary Todd Lincoln) and literary (Fletcher Christian) context that pulls me in. And blimp armies. Who can resist blimp armies? As it turns out, it's also a pretty accurate summary of the song in question. Yes, it's one weird song on one weird album (Rasputina's Oh Perilous World). Just because it's weird doesn't mean it's not true.
Posted by Andy Whitman at 8:58 AM

Technically speaking, blimps fly in "murders" (as do crows), not "armies," but I like the image nonetheless.

You're certainly right about crows, John. And you just helped me make a couple musical connections. Joe Henry, one of my heroes, has an obscure and probably out-of-print album called, you guessed it, "Murder of Crows." The reference was always obscure to me. And everybody's favorite musical whiners, Counting Crows, have a song on their "August and Everything After" album called "A Murder of One." That title now has a little more resonance for me.

I couldn't find the "murder" connection for blimps, though. The only Google match found a blog entry that contained the sentence "I could murder my girlfriend, Donna" and the sentence "Akron is the only city where it's no unusual to see blimps." I hope this person has not dropped Donna from a blimp.

"I couldn't find the "murder" connection for blimps, though."

Yeah. I kind of made that up.