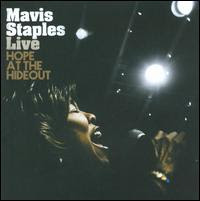 A few years ago I picked up the phone and dialed Mavis Staples. I was writing an article about her for Paste Magazine, and she had graciously agreed to answer my questions.

I'm not sure that I had any expectations. I knew her music, or some of it, at any rate. There were more than fifty years of it to take in. I knew her history. And I knew her new album. "Okay," I said to myself, "just sit down and have a nice, friendly chat with a member of the Rock 'n Roll Hall of Fame who used to hang out with Dr. Martin Luther King, and who was the voice of the Civil Rights Movement. No pressure, dude."

It turned out that Mavis was in a talkative mood. She talked about Have a Little Faith, which was her current album, but mostly she wanted to talk about Jesus, and the sorrow of loved ones dying, and the joy of singing. At one point she started crying. Then she started praying. Then she prayed for me, and asked me the names of my wife and kids, and prayed for them. Then she started singing. On the phone. An impromptu version of "Will the Circle Be Unbroken."

At some point during the proceedings, and head-spinning proceedings they were because my agenda was shot all to hell, it dawned on me that maybe it wouldn't be inappropriate to be thankful for that little private concert. "Thank you so much for ..." I began. For what? For the music? Well, yeah, but this was something more. For the phone conversation? Sure, but it was more than that.

"Thank you so much for being you," I eventually blurted out, and immediately winced.

In the midst of a couple other significant events, Mavis Staples quietly released a new album yesterday. It's called Live: Hope at the Hideout, and, as the title implies, it's an aural record of a recent concert at the Hideout Club, a tiny blues venue in Chicago. "I'll Take You There," one of the great R&B tracks of all time, is there, with Mavis somehow capturing all by herself the soulful glory of The Staple Singers. Pops is gone now, and her sister Cleotha resides in a nursing home, lost in the oblivion of Alzheimer's. And Mavis herself is 69 years old, and the voice is frayed at the edges. It doesn't really matter. She is, and always will be, a powerhouse of soul in all the best musical and spiritual senses of that term. She's singing for the audience, and for Jesus, and for all the pioneers who went before her. She sings a batch of Civil Rights era songs -- "Down in Mississippi," "Freedom Highway," "We Shall Not Be Moved" -- and she imbues them with a passion and an urgency that reminds us that 2008 really isn't all that far removed from 1963, and that hard-won freedoms can be lost, and are still worth fighting for. She sings "Will the Circle Be Unbroken," and she convinces you that the circle takes in not only Pops and Cleotha, but Jackie Robinson and Rosa Parks, and you and me.

I'm a white guy from a midwestern suburb, and I won't pretend to fully know or understand what yesterday meant, and means, to someone like Mavis Staples. But I thought about her a lot yesterday, and the conversation we had, and that little impromptu concert. I took breaks in between watching the electoral map change from red to blue for a black man, and headed for the den and listened to Mavis's new album. I was proud to be an American in ways that Lee Greenwood couldn't even fathom. There will be many days ahead when the old, partisan bickering will begin anew. But for at least this one day it occurred to me that I was thankful for this broken, divided country, and for a woman who couldn't help being herself.
Posted by Andy Whitman at 1:23 PM

Great post. Thanks for sharing that experience with us.

congratulations on being a blue fellow in a blue state. what a great story, thanks for sharing. I have only been listening to Mavis Staples for a couple of years now but what soulful stuff it is.

Our new place is four blocks from a Cheapo Records shop and in the lull between the wave of 8 p.m. CST projected winners and the 9 p.m. poll closings, I remembered this album was due out and zipped down to pick it up.

Waited till this morning to play it, though, and ended up listening exclusively to this and "We'll Never Turn Back" at work today. Can't recommend it highly enough.

Thanks for the great story, Andy.

Come on. Lee Greenwood's a human being. I appreciate your conversation with Mavis and your appreciation for her singing.
We heard Hank Williams, Jr. sing at the McCain rally.
There is not so much difference among all of us as that.

Wow! Andy, this is amazing. I listen to the Staples Singers' "Great Day" probably more than I listen to any other album by anyone. It is always Mavis's voice that stands out and floors me every time. What an amazing singer. As a former journalism major, I appreciate how you seemed to get behind the scenes with this story, showing new angles of a luminous figure.

I love your story about interviewing her. I was at the Hideout show where they recorded it. It's not a blues club but more of an indie rock place. Neko Case and Kelly Hogan used to bar tend there. All the employees are in bands or are artists, but it's mostly a white crowd, though there's the occasional hip hop show there and they have killer soul dance parties. All of which to say is that the Staples show was recorded early on a Monday night when it was still light out to a small room that was made up maybe a third by Hideout employees. It was a mostly white crowd that probably felt a little self-conscious and a little too sober to participate in her call and respond style leading into the songs. But it was an amazing show with the election coming up and a sense that you were witnessing a vibrant soul of history, a link between the past and the present, and a reminder that not everything that makes up the American spirit is imperialistic and hubristic.