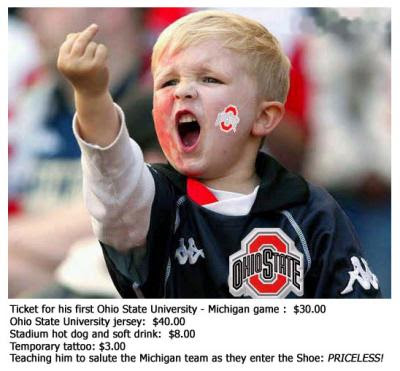 We train 'em up young in these here parts. The first words that Columbus toddlers learn are "mommy," "daddy," and "Fuck Michigan."

So there's the Big Game here tomorrow, except this year the Big Game has lost some of its gravitas and import. First, the Buckeyes, at 9 -2, have been abject failures. Ask 75% of the people in Columbus and they'll tell you that they suck. Second, Michigan's suckage is off the charts. They suck when they come into the Big Game at 11 - 0. This year they are 3 - 8, which has all the eye-popping surreality of Britney Spears singing Puccini or a Hold Steady review in Christianity Today Magazine. We need a new vocabulary, something that will take in mega-suckage of such monumental proportions that all previous suckage is relegated to a footnote.

Me? I had kinda forgotten about the Big Game. And so it was probably fortuitous that I found myself on the campus of The Ohio State University last night for reasons that had nothing to do with football. At 11:30 p.m., helping to load gear into a van after a concert, I was stunned to see hundreds of nearly naked and drunken OSU students making a beeline to the center of campus. There, amidst the inspiring architecture of the world of academe, lies Mirror Lake, an algae-covered swamp during the beautiful Ohio autumn days (Sept. 23rd - 28th), but last night frozen over with a thin sheet of ice. And all the nearly naked and drunken OSU students were jumping into Mirror Lake. This is apparently a hoary tradition that dates back to the '30s when all the students drove around in Packards and wore beaver coats. But it has survived down to our frantic telecommunications age, and I could see various clumps of students frantically texting their friends to come on down and participate in the collegiate camaraderie.

We decided to watch for a bit. "O-H!," one particularly drunken and belligerent frat boy chanted in my face. I considered my options. "S-H-I-T!" came to mind. I let it pass, which was probably a good idea. He ran off to jump in the lake. After fifteen or twenty minutes or so the students started jogging back to their dorms. "I'm so cold," one miserably wet young woman told us as she shivered her way back to south campus. I thought of starting the "N-O! S-H-I-T!" chant. Again, I let it go.

So now I'm stoked for the Big Game. I'm hoping to borrow a toddler, perhaps from one of our church friends. There's no better time to get started, and to help train up a child in the way he should go. In another eighteen or nineteen years he or she will be ready to jump in the lake.
Posted by Andy Whitman at 12:39 PM

L - O - totally freaking L. I am a former student at OSU, now living in Massachusetts, across the street from a couple of Michigan people. We play flag war in the 'hood, and whomever gets their flag out earliest on game day wins. Those idiots got up at 5am last year, but I care not. My flag's bigger.

What I would have given to have witnessed the great Mirror Lake dive. I never participated, and I'm proud of that!