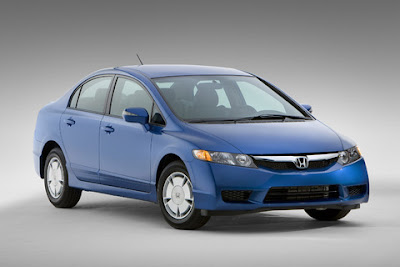 We bought a 2010 Honda Civic last night. With alloy wheels and moonroof. My wife will drive it. She's always wanted a moonroof, and we're not getting any younger, so it seemed the time to spring for a moonroof.

Because it is a sacrosanct rule that the wife always gets the new car, everybody else shifts accordingly. I get the 2009 Mazda 6, previously driven by my wife. My 23 year-old-daughter gets the 2004 Chevy Cavalier, previously driven by me. It had better last her through grad school. The 1995 Geo Prizm (no, they don't make 'em anymore), formerly driven by my 23-year-old daughter, now sits in the driveway, waiting to be driven by my youngest daughter when she's home on school breaks and needs to get to work.

It is actually this vehicle that started the snowball rolling. The Geo Prizm is a two-tone (blue and rust; blue because that's the original color, rust because it's now mostly rust) monstrosity that is the official scourge of our suburban neighborhood. The defrost, heat, and AC don't work, which means that the windshield fogs up quite menacingly whenever there is a hint of moisture in the air. It is only safe to drive about 4 days per year in Ohio. It is also truly an ugly car. When my testy neighbor complains about the length of my lawn, I tend to park it on the street, close to his mailbox. Just being neighborly, praise God. Perhaps I need to read the post below again.
Posted by Andy Whitman at 10:57 AM

Our neighbors all get new Geman cars every couple of years, while we tend to hang on to vehicles for 10+ years. We, too, rotate the cars to the younger drivers. WHen our son inherited the unsightly Ford mini-van, it had to sit in the driveway, in full view. Snide comments would be dropped at gatherings. "Too bad the garage is full," they'd say to us. When the car finally died, we allowed it to sit in the driveway for a month or two, just so the neighbors could see an American car for just a little longer. You know, for posterity.

I know you're the gatekeeper and understand the need to screen some posts but was mine that bad?

Tim, I'm certainly not intentionally screening your comments. It's possible I inadvertently deleted them, but the more likely explanation is that sometimes they just don't show up for me to approve or reject. I know that's happened to others as well.

I do occasionally choose to delete comments rather than publish them, but that's only when I've encountered assholes who usually sign themselves "Anonymous." That's not you, on either count, so I assure you that I didn't intentionally withhold your comment.

Andy, thanks for your reply. Apparently you didn't get it and I don't blame you for deleting the anonymous ones.