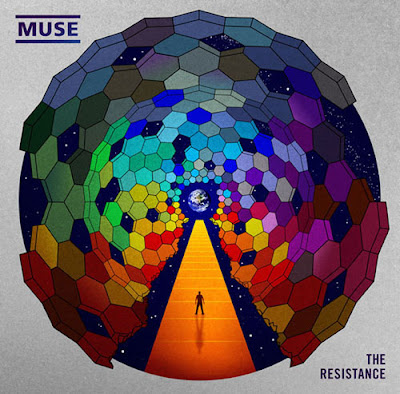 My name is Andrew Whitman, and I am a Muse fan. The admission doesn't come easily. I realize what it means; I have outed myself as a hopeless dweeb. I don't care. I also have a bit of a soft spot for Yes, early Radiohead, U2, Rush, Queen, and every other melodramatic musical precursor this album conjures. You want understated? Look, they don't wear clown makeup or breathe fire. That's the best I can do.

The Resistance, the latest from the Devon, UK trio, ups the already supersized ante. Not content with releasing merely overblown songs, Muse here adopts the most overblown of all musical genres: the prog-rock concept album. And who really cares if the concept is a bit muddled? In the Muse version of reality, the world has been hijacked by faceless corporations, and only a daring, courageous boy and girl dare to resist the commercial onslaught. Opening single "Uprising," with its jack-booted martial rhythms and hammering guitars, sets the tone. "The paranoia is in bloom," lead singer/songwriter Matthew Bellamy sings. Yeah, you might say that.

Naturally, George Orwell figures heavily in the proceedings, nowhere more so than in the ominous "United States of Eurasia," a dystopian take on western-style totalitarianism that features Bellamy in full-throated, multi-tracked "Bohemian Rhapsody" mode. Somewhere Freddie Mercury is smiling. It's lovely dread, and manages to quote Chopin before hurtling into the yawning abyss.

And so it goes for the first eight songs, with Bellamy and band making an unholy racket, reveling in the existential despair, and never settling for dramatic when melodramatic is at their disposal.
It's great, histrionic fun, the kind of kitsch that is all the more funny because one senses that the band doesn't mean it at all ironically. Beneath the rock star veneer, it's not too difficult to imagine the insecure adolescent living out his high school chess club revenge fantasies:

They will stop degrading us!
We will be victorious!

Ironically, it's on the multi-part, 15-minute suite "Exogenesis Symphony" that Muse lets down on the melodrama. I know. A title like "Exogenesis: Symphony Pt. II (Cross-Pollination)" would appear to be a bombastic slam dunk. It has Greek words, Roman numerals, and hyphens, all in the same title, and the music features full-on mellotrons and a Rachmaninoff piano concerto imitation. Alas, it's boring, and the only prog you'll experience is the progressive descent of your eyelids over your eyes.

Still, most of The Resistance is wondrously entertaining, and the high points occur frequently enough to allow me to ignore the glorious inconsistency of a mega-band on a major label railing against corporate excess. Screw 'em, comrade. Where's my cape?
Posted by Andy Whitman at 1:31 PM

no reason to be ashamed.
muse rocks!

Wonderful review, Andy! And I couldn't agree more. Cape it up!