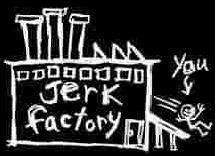 The trouble with contemporary Christianity is that a massive bait and switch is going on. "Christianity" has essentially become a mechanism for allowing millions of people to replace being a decent human being with something else, an endorsed "spiritual" substitute. For example, rather than being a decent human being the following is a list of some commonly acceptable substitutes:

The point is that one can fill a life full of spiritual activities without ever, actually, trying to become a more decent human being. Much of this activity can actually distract one from becoming a more decent human being. In fact, some of these activities make you worse, interpersonally speaking. Many churches are jerk factories.
-- Dr. Richard Beck

I watched the popular television show The Amazing Race last night. One of the competing couples, wholesome Barbie and Ken lookalikes, had made it a point throughout the race to emphasize their faith in Christ. They were racing for Jesus, and trying to win a million bucks for Jesus, presumably on the understanding that their local church would receive the $100,000 tithe. They were smiling and happy, confident in their abilities. Then they hit a bump. Barbie needed to go down a big, scary, nearly vertical water slide to continue in the race. She balked. It was too tall, too fast. She was afraid of both heights and water. Ken encouraged her. Remember, baby, I mean sister, a million bucks is at stake here. You can do it. Then he, umm, exhorted her. Come on, you've got to do it. I mean it. You've got to do it. Now! Then he got behind her and forcibly tried to push her down the slide. Barbie fought back, kicking and screaming. Then she cried. Then she pouted. "I wish I was back in Nashville," she whined.

She never went down the slide. Barbie and Ken finished last, and were eliminated from the race. At the end, summing up their achievements, Ken stated, "I don't hold it against Barbie. There is freedom in forgiveness." Well, yeah. But here's the deal, Ken: you're an abusive jerk. And Barbie is a pampered, whiney, jerkette. Praise God. Or better yet, don't, at least not in front of a camera. It's better that the watching world isn't aware of your life-changing faith.

Dr. Richard Beck, Psychology professor at Abilene Christian University, writes persuasively about the lengths we go to as Christians to avoid the nebulous but incredibly challenging task of living less like jerks. We substitute activity for deep spiritual change. And when I say "we," I mean we, meaning you (if you're a Christian) and me. I understand the appeal of Dr. Beck's laundry list. I once spent an evening in seminary getting drunk and reading 100+ pages that distilled the arguments on whether the apostle Paul was writing to churches in north Galatia or south Galatia. I'm thinking that north Galatia won in the long run. I could be wrong. I know I lost.

And really, as much as I cringed when I watched the interpersonal debacle unfold between Barbie and Ken last night, I felt a great deal of empathy for them. They're broken. He's got anger issues, she's a passive-aggressive princess, and they just happen to love Jesus. They're a lot like you and me. It would take someone far more versed in Church history and polity than me to address all the factors that contribute to a Christian culture of busyness that never quite gets around to addressing systemic life changes; in less fancy terms, how to be a jerk less frequently. I'm content to leave it as the product of settling for the good instead of the necessary. There's nothing wrong, per se, with any of the activities Dr. Beck lists. They simply don't address the deep spiritual wrestling and surrender that needs to take place before real change can come. That can be a real-life horror movie, and most Christians don't approve of horror movies.

In the meantime, I'm going to advocate the radical, anti-evangelistic practice of shutting up, at least for me. I can't control other people, which is one of those deep spiritual lessons I'm still learning. Today's commandment: I say unto you, shut up and be less of a jerk. I can fantasize about how it would have applied on a television show last night. I'm fairly certain that it's a commandment that I need to heed today.
Posted by Andy Whitman at 1:09 PM

Well said, Andy. While the things on Beck's list make poor substitutes for becoming a more decent human being, I've never been able to figure out how that can happen without doing a few of those things as a means to that end (and I don't mean just any few). On the other hand, I've met more than a few very decent people who probably don't to any of those things. Maybe plain decency isn't the proper aim, but it's a good start.

well, I for one, say horror movies are just fine ;)

Well, the news from the Web-only "Elimination Station" clips on the Amazing Race Web site is that Canaan broke up with Mika following their elimination from the race, giving the old "I'm not ready to be in a relationship right now" excuse.

And, you know, he could be right about that. Maybe he read Andy's blog and realized what a jerk he'd been.

That's me; driving a wedge in human relationships for more than five decades now. It's my gift.