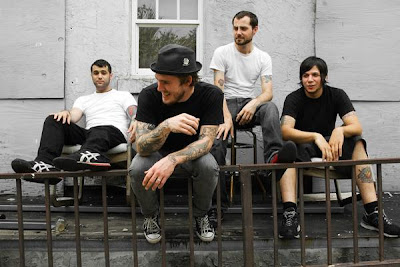 From my Image Journal blog ...

Contrary to the hyperbole you hear from some music critics, rock 'n roll did not save my life. I grew up in the insulated worlds of Worthington, Ohio and Park Forest, Illinois, where I was more likely to die of fertilizer poisoning than gang warfare.

The bucolic cul-de-sacs of Worthington had names like Raven's Nest Court and Hidden Hollow Drive. So I could never claim the blue-collar badge of rock 'n roll authenticity, that old Springsteen trick of rising above the mean streets and the dead-end towns through perseverance, a little faith, and the insistent squall of an electric guitar.

That doesn't mean that I couldn't relate to the sentiments, though. Hidden Hollow Drive didn't value kids who wrote poetry on their lunch breaks any more than the mean city streets did, and fairly early on I pledged my allegiance to anyone who wrote songs that could be roughly translated as "It's you 'n me, babe, against the world." These were the perfect sentiments and the perfect musical anthems for misfits like me: the young, the misunderstood, and those who took umbrage with the universe.

Bruce Springsteen was the first to tap into that reservoir of resentment and pent-up angst. His 1975 album Born to Run rang in my head like an insistent alarm clock, awakening something long dormant in my soul. Wake up and smell the crushing boredom, the tiny, desperate lives that go through their tiny motions, the hollow, pampered, country club existence where the soul checks out a few decades before the heart stops beating.

It was, of course, utter shite, the kind of arrogant, self-serving twaddle that most people grow out of in adolescence. It just took me a couple decades longer to figure it out. The reality—my reality, in fact—is that people in suburbia experience the same hopes and fears as anyone else, and that they aren’t cushioned in any way from the heartbreaking realities of kids who make stupid choices, and pink slips from their employers, and the looming specter of colon cancer and heart attacks. And so I’m always intrigued and amazed when I encounter those impossibly romantic, escapist sentiments again.

Broooooce, what have you wrought?

In this case, the latest revelation came from a new album by a band called The Gaslight Anthem, Jersey kids just like Bruce, trying to get out while they’re still young, but one generation down the line:

Oh, Lord. There it is again; the old, insistent summons to elope from life, that silly, ancient whopper that you can get in the car and outrace the demons that follow you around. The name of the album is The ’59 Sound, a nod to Miles Davis and Kind of Blue, and it’s great, and it’s terrible. It’s great because it recaptures the manic energy and passion of those early Springsteen albums, the impossibly romantic mythos of the poet with a beat-up jalopy and a leather jacket and an electric guitar. And it’s terrible because it locates the solutions in all the wrong places.

It sounds wonderful, by the way. Lead singer/songwriter Brian Fallon has Bruce’s swaggering bravado, even if his lyrics are often little more than a pastiche of Springsteen’s perennial themes. The guitars slam and chime, and the drummer sounds like he wants to pulverize big boulders with his bare arms. All of that is to say that it’s enormously persuasive rock ‘n roll, sure to please the Boomers who haven’t really paid attention for the past thirty years. “No surrender, my Bobby Jean,” Fallon sings on “Meet Me By The River’s Edge,” thereby name checking three Springsteen standards in about ten seconds. There’s little doubt about the inspiration for these songs.

And maybe I would hear it all differently at 24 than at 54. At 24, I was convinced of my towering sensitivity; my ability to see more and feel more deeply than any of the shallow, money-grubbing schmucks around me. All I needed was to blow this pop stand with the right girl in tow, careen off to God knows where, as long as it was anywhere but here. At 54 I find myself living five miles from where I grew up, born certainly not to run, and probably not even to venture very far down the road, but perhaps to deal with the nasty character traits and besetting sins that hinder me from soaring. It’s redemption, to be sure, but it can’t be found beneath a dirty hood.

I still love Bruce Springsteen, and part of me loves Brian Fallon and those music critics who genuinely believe in rock ‘n roll as salvation. I hear the desperation, and I get it, even from suburbia. There’s got to be something, anything, better than this. They are right. The Gaslight Anthem looks back to 1959, and to 1975, the year of Springsteen’s coronation, trying to find the clues in a golden, mythic past.

Me? To quote the punk band The Buzzcocks, I feel a nostalgia for an age yet to come. I can’t wait.
Posted by Andy Whitman at 9:56 AM

Andy, that really is a beautiful post about The Gaslight Anthem!
TGA has quite a following, and you should check out the forum at www.dimestoresaints.com There are really cool stories, lots of live shows to download and just anything you could imagine TGA related.

TGA really have an amazing sound, and at the forum we had a debate about what kind of sound they were: rock, punk, soul etc... but we finally agreed on calling them "inclusion rock" as just about everyone can listen to them.

I hope to see you at the forum

nice to see you finally give Gaslight at least a little due, Andy ;)