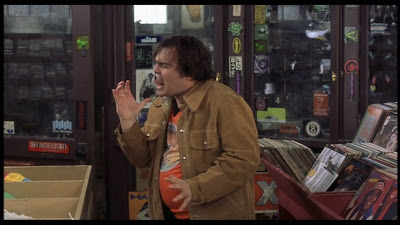 (h/t to Maureen, who pointed this out to me)

Once upon a time there were establishments called record stores. These were dubious enterprises, often dank and dark, housed in subterranean passages under city streets, and if the surroundings didn't scare you off, the employees often would. On a good day, a dubious purchase might merely merit a smirk or a raised eyebrow from the guy behind the cash register. More typically, an album by, say, Abba or Olivia Newton John, would elicit guffaws, chortling, and outright ridicule. I knew people who would rather lose money than sell you an Olivia Newton John album. It might have been bad for business, but these folks never claimed to be in business for business, and the clueless customers were always good for a laugh. They brightened up the day down in those cellars, and the sharks could always smell the fresh meat.

One of those sharks was a guy named Bela, who worked for many years at Schoolkids Records and Used Kids Records in Columbus. Bela has started a blog, where he remembers those days. I've met Bela, and Dan and Ron and Curt, and all the other guys he writes about whose approving nods would always validate my existence. If you've never spent a Saturday afternoon (yes, an entire Saturday afternoon) in a record store, or gotten in a heated argument over whether Elton John lost all credibility after Tumbleweed Connection (1971), or whether he held out until after Honky Chateau (1972), then none of this will make much sense to you. But some of us will recognize these folks, and will say, "Yeah, those are my peeps." On Bela's blog you will find things like this:

I admired a man named Craig Regala who worked alongside his longtime girlfriend at Magnolia Thunderpussy records, I had an undying crush on her but with her being with him and at least twenty-six years old was way out of my league. When the north location of Magnolia’s closed, I hired Craig at Discount where we laughed at the insanity of a corporate record store. We would sometimes crouch below the counter as the other one rang up a pain-in-the-ass customer and pull our penises out and wiggle them around, just out of eye shot of the customer. Craig had about seventy-seven ear piercings in his ears and tattoos that didn’t consist of roses or naked ladies on his arms, he was funny as hell and insightful.

If you're put off by that, then don't read. And some of us will think, "Man, I've always wanted to do that to some snarky customer." What can I say? I liked Jack Black in High Fidelity, too.
Posted by Andy Whitman at 12:20 PM

I always loved Jack Black in High Fidelity but I'm not sure the customer was the one who was snarky, at least the way I understand the meaning.

Thanks for the kind words.
-Bela

Dang it, I can't remember the name of the store I used to visit on North High. I won a used record once from QFM 96's Russell Carey back when he had a show called "Psychedelic Sunday."

I loved used record stores and the way they smelled. I hated the way the guys judged me because I wasn't dressed in the "cool" outfit of the day, though. Snotty idiots!

Sometimes there would be a non-judgemental guy, though, and I'd click with them. One guy in San Diego turned me on to Jaco Pastorius, and I'm forever in his debt.

I miss record stores something fierce.

Silly rabbit. It was after Madman Across the Water that Elton John lost most of his integrity.

He lost ALL of it after Captain Fantastic.

That's a great article, Joel. Thanks for pointing it out. I normally read The Other Paper religiously, or non-religiously, but routinely. Whatever. It figures that the one issue I skipped would focus on Bela and Jerry Wick and Jenny Mae. What a sad story. I find Bela's blog sad, moving, hilarious, raunchy, and true. I like it a lot.

Yeah, those guys are High Street were snobs, but they had some darn good records. Thanks to them, I discovered Gentle Giant, Vander Graph Generator, Cocteau Twins, Husker Du, Richard Thompson. However, one things were those Columbus stores didn't have were the great bootlegs at School Kids Records in Athens, Ohio.

If I had all the money back I spent there I'd be able to pay off my car loan.

Anyone who loves the record store guy has to read this piece from the Onion: http://www.theonion.com/content/node/27870

Cheers to all the gang at Schoolkids in Raleigh!