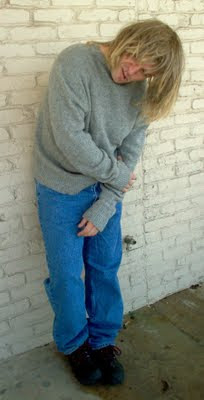 Matt was fifteen when I met him. He was an acne-ravaged, easy-going slacker, the kind of kid whose life seemed motivated by little more than rock ‘n roll and video games. He went to high school, where he did poorly. He played guitar and sang in a rock ‘n roll band called The Eyes. He worked at Burger King on the weekends. He was aimless, without focus. But he was just a kid, not really formed yet, still very much in process, and he was sweet and amiable. He believed in peace and love. And he claimed to be in love with my daughter.
As parents of a kid in love with a slacker, Kate and I knew we had to walk a fine line. We were concerned. We didn’t have all the details, and we couldn’t see the entire picture, but the picture we could see was less than promising. At the same time, we knew that nothing would drive a wedge more deeply into our relationship with our daughter than the implied or overt criticism of her boyfriend. So we tried to be tactful. We kept our eyes open. And we tried to be friendly to Matt. Matt loved rock ‘n roll, and I loved rock ‘n roll, so we talked about Jimi Hendrix and Jim Morrison. Matt admired them greatly, and I admired their music.
“So what do you think you might do after high school, Matt?” I asked him one day.
“I don’t know,” he shrugged. “If our band really takes off, I’m thinking that maybe we could all move out to California, sleep on the beach, live off the land, man. I’ve always wanted to do that.”
“Oh,” I said.
As it turned out, my worries over the destitute hippie future of my eldest daughter were half-unfounded. My daughter dated Matt for a few months, then broke up with him. She never shared the reasons why with us, but I can guess. They both graduated from high school a couple years later. My daughter headed off to college. Matt worked at Burger King. My daughter graduated from college. Matt worked at Burger King. They encountered one another periodically in social settings, and I occasionally inquired about his present prospects. “He’s a mess,” my daughter would say, shaking her head. “His idol is Kurt Cobain. What does that tell you?” It told me enough.
Matt died on Saturday of a heroin overdose. He was 22 years old. I can only imagine that his parents, whom I’ve never met, moved to the suburban idyll of Westerville, Ohio for the same reasons that many people head to the suburbs. They wanted safety, protection, pleasant neighborhoods, good schools. They wanted to give their kids a fighting chance. But you can’t protect people from themselves. Many people saw this coming, but no one was able to stop it, primarily because the protagonist didn’t want to stop. And when your kid wants to be Kurt Cobain, or Jimi Hendrix, or Jim Morrison, things can only end badly.
They did. I feel awful for my daughter and her friends, who knew Matt well, and for his parents, who have to embark on the unthinkable and horrendous task of burying their child. Mostly I feel bad for Matt, a lost kid who never once figured out that it was possible to be found, and who was thoroughly engaged in the business of checking out long before he officially left the scene of the abdication.
He was only a boy, a little kid who wanted to play. May he rest in peace.
Posted by Andy Whitman at 9:43 AM

Sorry to read this. It's a story I know all too well.

May God help all the "lost boys."

very sorry to hear this andy... thanks for writing about it.
maureen

Beautiful tribute. So many people go through life 'unseen'. You demonstrate that even teh unseen leave an impact. Mean something.

Well said. A beautiful tribute to a human being and a reminder that we all matter.