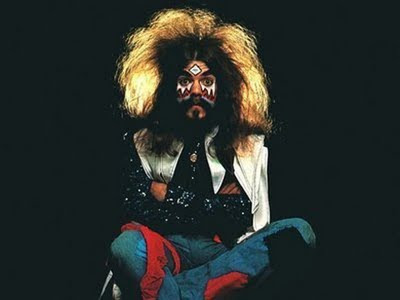 Roy Wood had it going both ways. His hair was not only long, it was wide. Aside from his sometimes fearsome, leonine appearance, he was also a first-rate rock 'n roll synthesist, mixing influences as diverse as Vaudeville, Syd-Barret-era Pink Floyd psychedelia, Elvis rockabilly swagger, and The Beatles' effortless melodicism.

Wood's primary musical vehicle was The Move, the late '60s/early '70s British band that eventually spawned the better-known Electric Light Orchestra. You've no doubt heard the latter, but you're a serious rock 'n roll fan indeed if you've heard the former. Although The Move had several Top 10 hits in their native England, the magic never crossed the pond. These days The Move -- and Roy Wood -- are largely forgotten relics of a bygone era. And it's too bad. Some of those relics still make for very fine listening.

The eponymous debut album (1968), Shazam (1970) and Message From The Country (1971) are all well worth tracking down, but it's Message From The Country that really sticks with me. The album was recorded simultaneously with the first Electric Light Orchestra album. Most of Jeff Lynne's songs ended up on ELO I; most of Roy Wood's songs ended up on Message From The Country. And while ELO did rock/classical fusion as well as anyone, it is Roy Wood and his unapologetic, no frills rock 'n roll that has held up the best over the years. There are at least two songs here that deserve classic status -- "Do Ya," which has one of the greatest bludgeoning guitar riffs ever recorded, and "California Man," a rockabilly/surf pastiche later covered to great effect on Cheap Trick's Live at Budokan. The rest of the album -- recently re-released and fitted out with the usual assortment of outtakes and demos -- is almost as good; a wildly eclectic mix of psychedelic rockabilly country show tunes that are united only by their uniform excellence and their unstoppable hooks.

Do yourself a favor and check out this criminally ignored music.
Posted by Andy Whitman at 10:33 AM

Surprise! iTunes has 2 albums available! Thanks for the heads-up!