Another Person Who Died 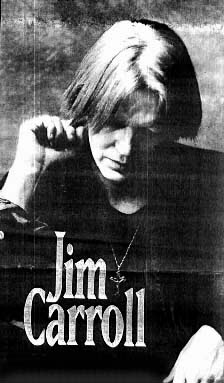 I'm going to stop writing about old musicians in Paste.

Teddy sniffing glue, he was 12 years old
Fell from the roof on East Two-nine
Cathy was 11 when she pulled the plug
On 26 reds and a bottle of wine
Bobby got leukemia, 14 years old
He looked like 65 when he died
He was a friend of mine
Those are people who died, died
They were all my friends, and they died

G-berg and Georgie let their gimmicks go rotten
So they died of hepatitis in upper Manhattan
Sly in Vietnam took a bullet in the head
Bobby OD'd on Drano on the night that he was wed
They were two more friends of mine
Two more friends that died
Those are people who died, died
They were all my friends, and they died
-- Jim Carroll, "People Who Died"

Jimmy wrote poetry, he was 60 years old
Never woke up from a heart attack
Was a teenaged junkie but he made it out alive
'Til he nodded off and then didn't come back
He wasn't my friend, but he wrote like one
I miss him, he died.

Jim Carroll made soundtracks to the horror movies in his head, but he had a beating heart until this weekend. He never lost sight of that heart.
Posted by Andy Whitman at 10:37 AM

RIP. What a loss.

I'm good as long as Patti Smith is breathing, though.