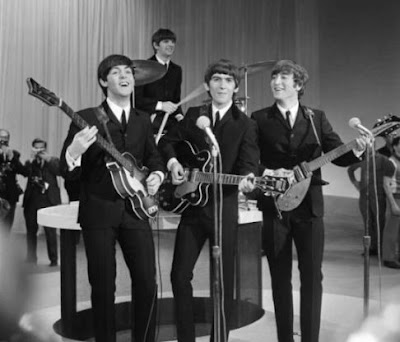 In case you've been hiding in a cave, tomorrow (9/9/09) marks the release of the remastered Beatles catalogue. Me? I'll be holding on to the French and English pressings of the vinyl albums on Odeon and Parlophone, respectively. The newfangled reissues can't possibly sound better than that. It means that I occasionally have to puzzle out album titles like 4 Garcons dans le Vent (whatever that is, it's not A Hard Day's Night), but this garcon is still happy to have relatively pristine versions of the vinyl.

And isn't it amusing that those were considered moptops?
Posted by Andy Whitman at 10:49 AM

I wish the length of young singers' hair was all we aging boomers had to worry about. Those were the days.