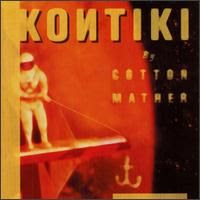 I totally missed this band when they were in their heyday (to the extent that obscure Austin, Texas bands with a serious late-period Beatles obsession have a heyday). At any rate, I know lead singer/songwriter Robert Harrison from his albums as Future Clouds and Radar. And really, this is more of the same -- wildly eclectic psych/power pop, anchored by jangly guitars and multi-tracked John Lennon vocals courtesy of Mr. Harrison, who probably missed his shot at the big bucks by passing on the Beatlemania revival.

But you know what? This is a 5-star album. There are fourteen songs here and fourteen winners, a pitch-perfect Beatles homage bursting with hooks and swooning harmonies. The album came out in 1998, 34 years too late for Ed Sullivan. Oh well. The kids haven't screamed hysterically since John married Yoko, but I'd sure like to holler about the virtues of this album.
Posted by Andy Whitman at 1:34 PM

I found this record in a $1.00 bin in a record store out on the west coast. I remember reading great reviews of it, so I bought it. You are right, a 5-star album indeed...

How is the new job going?