The Mountain Goats -- The Life of the World to Come 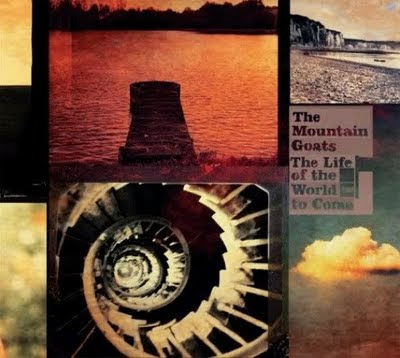 His master replied, 'Well done, good and faithful servant! You have been faithful with a few things; I will put you in charge of many things. Come and share your master's happiness!'
-- Matthew 25:21

The prolific John Darnielle and his revolving cast of bandmates, collectively known as The Mountain Goats, are about to release a new album called The Life of the World to Come. As with all Mountain Goats albums, this one is a lo-fi indie folk hootenanny, not too concerned with technical instrumental prowess or vocal pitch. And like the others, it's pretty great.

Darnielle's always been a literate songwriter, and this time the entire album is based on impressions from a book; in this case, the Bible. Every song is Darnielle's idiosyncratic take on a Bible verse or verses. Representative titles include "1 Samuel 15:23," "Hebrews 11:40," and "Matthew 25:21." This being a Mountain Goats album, you won't hear those verses quoted in the lyrics. Darnielle is too quirky and too introspective to write about anything but himself. But there is a generosity and an open-heartedness in his scriptural musings that is astonishing. What we have here is a musical lectio divina; the Word interacting with a life that is fully cognizant of the pain and suffering of others; and a life interacting with the Word. It's the farthest thing removed from a rote CCM Scripture Quote fest:

And I'm an eighteen wheeler headed down the interstate
And my brakes are gonna give, and I won't know 'til it's too late
Tires screaming when I lose control
Try not to hurt too many people when I roll

Find the Harbor freeway and head south
Real tired, head kind of light
I found Telegraph Road
I'd only seen the name on envelopes
Found the parking lot and turned right
I felt all the details carving out space in my head
Tropicana's on the walkway, neon red
Between the pain and the pills, trying to hold it at bay
Stands a traveler going somewhere far away

And I am an airplane, tumbling wing over wing
Trying to listen to my instruments, they don't say anything
People screaming when the engines quit
I hope we're all in crash position when we hit

That one's called "Matthew 25:21," and the biblical reference is quoted at the beginning of this post. It makes me want to weep and gnash my teeth and bang my head against the wall, which can be problematic when you're listening over iPod earbuds, and there's a co-worker on the other side of the cubicle wall. But it's great because of the little details, because Darnielle understands that cancer is always particular and personal, that it involves real people with real names and faces, and with real friends and family members they leave behind. Maybe I react the way I do because I know too many people right now who are facing that kind of fate. But that's why the song succeeds so well. We all have those stories. Fucking cancer. Darnielle's story is our story, too, but it's magnificent and worthwhile because the life he celebrates was a presence and a light in a specific time, in a specific place, known and communicated by a guy with a wobbly tenor and a tentative guitar technique and a hole in his big, big heart.

This is a fabulous album, and a profoundly Christian one, although I suspect the artist might deny the charge. That's okay. I'm not God, nor do I play Him on the internets, but I'll still give him a hearty "Well done, good and faithful servant."
Posted by Andy Whitman at 8:39 AM

I'm really glad you gave this the thumbs up.

I was worried about liking this album, given what the usual gang of idiots has been saying about it, notably that it's just like "Slow Train Coming" or some other earnest but so-so Bible-thumping albums from otherwise great artists.