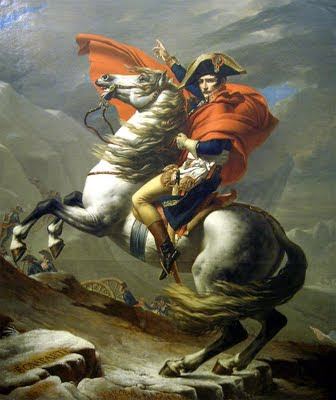 You may be familiar with the controversy currently raging over the National Endowment for the Arts' (NEA's) recent conference call with representatives from the Obama administration. The topic: how to enlist "artists" in the fight for health care reform.

Certainly this is a problematic topic, both for artists and the meaning of art. But it is not a new one, and I'm somewhat baffled by the outcry over this particular manifestation of an age-old issue. Commissions -- and frequently state-sponsored commissions -- of works of art have characterized every age, from the Greek and Roman eras to the present day. And governments have employed artists for their own ends since time immemorial. Jacques-Louis David's paintings of the emperor Napoleon glorified and mythologized a tyrant, and they were paintings that were frequently commissioned by Napoleon himself. A significant number of the architectural wonders of Europe were commissioned by governments. In the modern era, we remember with horror the propaganda generated by Goebbels and the Nazis, and the stylized Russian worker posters of Stalin's totalitarian regime. But we overlook the film reels of our gallant boys in World War II, and we tend to think of the massive temples and obelisks scattered around Washington D.C. as national monuments, not propaganda.

It would help if we could define the terms, and not simply label any politcally-motivated art we don't like as "propaganda." Sometimes other people call these things "masterpieces."

I can't imagine that attempts to promote the Obama administration's push for health care reform would result in worthwhile or good art, but I'm willing to give it a shot. To the tune of "Blowin' in the Wind":

I just watched Peter, Paul, and Mary at a 1971 Peace March, singing this song as a prelude to Give Peace A Chance. (youtube)

So long, and thank you, Mary.

"...times they are a changin'" -- and do we really want to go back to where the opposition has to deal with great artists on commission embedding government talking points in their work?

Would the program be limited to advocating health care?

Personally, I'd like to see NEA and other grant programs become effectively politically "colorblind" while still continually increasing the quality of the Art. I don't know how that wish and the current proposal of commissioned propaganda (the term covers a lot of territory) can co-exist.

I realize that the government doesn't have the stranglehold they have had on media, including Arts, in the past, but from my small "l" Libertarian POV, do we really want to make it easier for the party in power (especially these distasteful two) to get it's particular message out?

This is very funny! But for the record, no such "program" exists. It's a manufactured controversy drummed up by the extreme right-wing blogosphere.

The NEA isn't offering anyone any funding for anything--they did ask some artists to help get people excited about participating in national service stuff through serve.gov. But there's no offer of $ (NEA doesn't fund individual artists) and there's no-one asking for people to support particular policy goals. The only suggestions for health care were to encourage service & volunteering in the areas of preventative care and child nutrition! And that didn't even come from the NEA but from the Office of Public Engagement.

Read the transcript of the call for yourself: