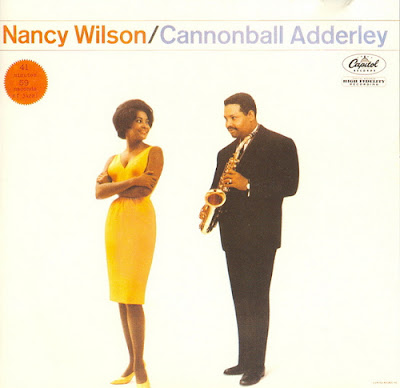 No, not the woman in Heart; the great jazz-pop singer from Columbus, Ohio. It's time to give a shoutout to the hometown girl.

Nancy Wilson doesn't get -- and perhaps doesn't merit -- the acclaim of compatriots such as Billie Holiday, Ella Fitzgerald, or Sarah Vaughan. She's often dismissed as a pop singer who aspired to jazz greatness, and, in truth, she recorded her share of pop fluff. So did Billie, Ella, and Sarah, by the way.

But when she's at her best -- and she's at her best when she's paired with established jazz giants such as Cannonball Adderly and George Shearing -- she's the equal of the holy triumvirate. Her 1962 album Nancy Wilson/Cannonball Adderly, is a case in point. Adderly was fresh off a longstanding gig with Miles Davis, and he sneaks in a couple quotes from Kind of Blue as asides in this mostly standards-dominated set. Nancy Wilson sounds invigorated and challenged, and she delivers a superb, and distinctly jazz vocal, performance. By the way, the pianist is a then-unknown dude named Joe Zawinul, who would go on to play with Miles before he started a little fusion band called Weather Report. This is a very fine and virtually unknown album. It's worth discovering.
Posted by Andy Whitman at 12:59 PM