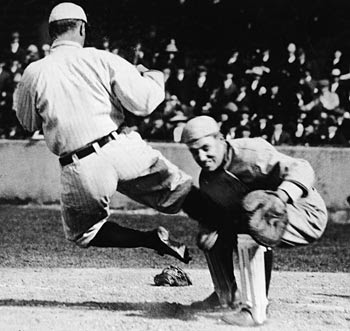 Any time you can mix ghosts, baseball, and Bob Dylan into the same song, you're doing all right. That's what The Felice Brothers do on their song "Cooperstown" from their latest album Yonder Stands the Clock.

It's hazy and indistinct, propelled by accordion wheezes and guitar strums, and those snarling Dylan words that are, impossibly, written and sung by somebody named Ian Felice. And like a lot of the songs that Dylan sings, it communicates a great deal without making a lot of literal sense. The ghost of Ty Cobb wanders the Baseball Hall of Fame in Cooperstown, New York. There's a church service, perhaps a funeral, going on. And then we're back in 1905, a young Ty Cobb on the basepaths, a young woman watching him from the stands. And from there it gets seriously weird and metaphysical.

For those who may not be familiar with the man, Ty Cobb may have been the greatest baseball player to ever play the game. And he was universally despised; a mean, contentious sonofabitch who never had a kind word for anybody, and who came into a base with spikes flying, determined to injure any poor schlep who happened to be between him and his goal. In the summer of 1905, his mother gunned down his father. Three weeks later, he played his first game for the Detroit Tigers. And he spent the next 21 years with a chip on his shoulder, daring anyone to stand in his way.

So a line like "he had a game like a war machine" sounds just about perfect to me, as does that line about the wolves that stand between first and third. I think I've been in that game. It's a great song; a fever dream of a bygone era, poetry excavated from the Georgia clay, simultaneously earthy and transcendent.

In Narrow's Church
The white walled church
They're singing that gospel song
"Bye and Bye, I will see my King"

Oh, Ty Cobb
You're dead and gone
You had a game like a war machine
And through the great
Hall of Fame you wander

The clouds break
And the pews shake
And the preacher's feet do pound
As the rain beats the streets of Cooperstown
-- The Felice Brothers, "Cooperstown"

I saw the Felice Brothers last year at the Philadelphia Folk Festival. They are a fantastic live act. Can't understand half of what they're saying, but they really put on a show.

One of my favorite songs of the year. I love the whole album. It's like Dylan and The Band invited The Pogues along to record The Basement Tapes. I don't where that skinny boy got that old, gnarled man's voice, but it's fantastic.

I also love this album. I also got a post in my feed reader (maybe you deleted it) that asked who likes Southern Gothic. I'm a huge fan. I love 16 Horsepower and Woven Hand, some of the dark Johnny Cash stuff, Nick Cave, Bill Molonee and all that.

I'm also a huge Flannery O'Conner fan. I grew up in Appalachia (am back there again now) and lived for a few years just down the road from her hometown in Middle Georgia. The south is still haunted by the ghosts of her stories as well as those of Walker Percy and Pat Conroy depending on where you go.

I'll have to check out some of the other folks you mentioned in your post. Thanks for the great writing.