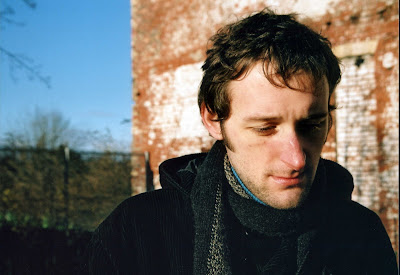 Glasgow folk singer Alasdair Roberts has a couple new projects that are well worth your time. His short EP The Wyrd Meme, out in September, is a very fine and more conventional followup to his surpassingly strange early 2009 album Spoils. That one featured excellent singing and a mad prophetic metaphysical vibe, as Alasdair ranted about Jehovah, Zoroaster, and Allah, and offered sentiments such as "I was bilious and saturnine/As I walked from shrine to wayside shrine." He hasn't exactly abandoned the idiosyncrasies on The Wyrd Meme (one song is called "The Hallucinator and the King"), but I prefer the more straightforward Trad instrumentation of the four songs here, even though these are songs that could have only been composed by Alasdair Roberts. He's a wondrous singer, a quirky and intelligent writer, and a great talent.

And he's also an integral part of Black Flowers, a Glasgow supergroup of sorts, which features Roberts' alternating, and sometimes duet, vocals with Trembling Bells thrush Lavinia Blackwall. The resulting debut album, called I Grew From a Stone to a Statue, is something else entirely, and is impossible to sum up easily because each of the five very long songs sounds completely different. You like Neil Young/Crazy Horse? That's here on the stunning cover of Richard Thompson's "Calvary Cross." Church pipe organ? Check. That's on Blackwall's lovely "Sweet Rivers of Redeeming Love." How about skirling bagpipes and a choir of droning, discordant voices that recalls the work of contemporary classical composer Olivier Messiaen? That would be "And the Words Fell Like Malting Blossom." Oh, and there are a couple of Trad ballads, too. With winding Neil Young guitar solos.