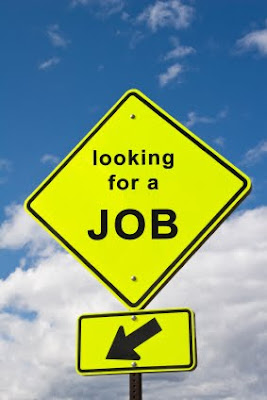 1) Apply for every job that looks remotely palatable.
2) Wait for someone to call you.
3) When asked if you are interested, say "Yes."
4) Explain the now six-month gap in your resume as "self employment," which includes non-paying gigs doing laundry, washing dishes, mowing the lawn, and writing for music magazines.
5) Wait for interviews and job offers to roll in.

We're now at Step 5. There is a current opening for a technical writer in Columbus, the first opening I've seen since March. Let me note again that there is one opening. And I've had six contract/consulting companies contact me during the past two days about the position, so I'm assuming that it's a real job, and that this might bode better than some of the interviews I've had for non-existent jobs (just beefing up the employment pool for when the job market opens up, is the way it was explained to me). It's with a large company in Columbus with whom I've had a previous working relationship. I did well. They liked me. I've done the kind of work for which they are hiring dozens of times in my life. And I'm open to downward mobility, which, no matter what the salary, will be sorta, kinda like upward mobility after six months of unemployment. Will work for food. And health insurance, but nobody's offering that these days.

So here's an interesting phenomenon. I've now answered the "Are you interested?" question with a "Yes" six times in the past two days. And now I'm getting yelled at by two of those companies because I've responded the same way six times, instead of "Yes" the first time and "No" the other five times. Here's the way I look at it: I don't have a job. I would like to have a job. And at this point no one has offered me a job. So why would I, in the absence of interviews and job offers, turn down any queries about my interest in a job? Beats me, but apparently that's what I was supposed to do.

Apparently only one company is supposed to "represent" me. Yeah? Well, I'm an equal-opportunity unemployed geek. We'll see what happens, and I'm assuming nothing. But I'm also not feeling particularly guilty.
Posted by Andy Whitman at 3:03 PM

Interviewer: "What's this six month gap in your resume?"

Interviewee: "Uh, I was given a mandatory sabbatical and spent the time doing intensive blogging and tweeting. Oh yeah, I also spiced up my Facebook page."

Best wishes and may the Lord open doors!

I hope the job comes through, Andy, whichever company gets the commission. :-)

I once worked as at a company that paid a headhunter $18,000 for having found a high level administrator, and soon after found the man's resume sitting in one of their own HR files.

Personnel services went down hill once they started referring to people as resources. Which is why personnel staff now feel they have the right to castigate you for threatening their intake.