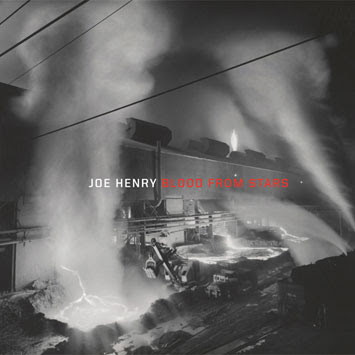 Joe Henry is a world-weary romantic; too jaded by false claims and hyped hopes to swallow the vapid Hallmark Card cliches, too cognizant of the tiny miracles of everyday existence to write off the promise and redemptive power of love. That's the uneasy conundrum that informs every song on Blood From Stars, his eleventh album in an ongoing series of dispatches from the war-ravaged front lines of a life.

When we last heard from Henry on 2007's Civilians, he was warily surveying the eroding legacy of America, a big, blustering nation that seemed to have lost its way. But the weighty themes were wedded to some of the starkest, most minimal music of his career, as if he didn't want the lyrical urgency to be drowned out by the sonic whirlwind. In contrast, Blood From Stars shows off Henry's most personal, intimate songwriting, but this time out he's backed by a hyperactive band and a full horn section, by turns soothing and cacophonous. No one in contemporary pop music uses horns as tastefully or as menacingly as Joe Henry, and the sonic palette on display here rivals that of the dizzying, claustrophobic greatness of 2003's Tiny Voices.

The core Blood From Stars band is comprised of the usual suspects: Marc Ribot on guitar, Patrick Warren on keyboards, David Piltch on bass, and Jay Bellerose on drums. They've worked with Henry for years now, and the interplay they've developed with one another borders on the telepathic. Henry gives them plenty of room to maneuver, too, and one of the great pleasures of the album is in listening to four virtuoso musicians strutting their stuff, and yet never stepping on one another.

Henry is working deep within the blues tradition on these songs, but these are blues that have been more informed by Duke Ellington and Langston Hughes than by Robert Johnson or Son House. Henry hangs his tunes on the blues framework, but the sounds and words are more reminiscent of the Cotton Club and the Harlem Renaissance. "The Man I Keep Hid," the opening track, is typical, with its sonic hints of Ellington's "East St. Louis Toodle-oo" and its poetic, confessional tropes. "Somebody used my mouth and laughed out loud," he marvels midway through, and it's a wondrous, telling line that will speak to anyone who has ever experienced the shock that greets the wounding remark that seems to emerge, unbidden, from the murky, subterranean depths of the human soul. It's one of many lyrical delights on the album.

Henry's first-person narratives can never be taken at face value; this is a man, after all, who has given voice to the conflicted inner dialogues of Richard Pryor and Charlie Parker. Somebody used my mouth, indeed. Nevertheless, many of the songs on Blood From Stars bear the unmistakable autobiographical imprint of someone who is wrestling with his inner demons. These are not so much love songs as marriage songs. They emerge a couple decades into the long, contentious, glorious dance, with no end in sight, and with all the old, familiar missteps and minor epiphanies on display. "My favorite cage," Henry calls it on the lovely torch song of the same name, crooning behind Ribot's Django-flavored gypsy guitar arpeggios, and it's a fitting metaphor for the themes he explores throughout these thirteen tracks.

On the album's most beautiful song, the shimmering "Channel," Henry fully explores the relational conundrums; pissed off, wanting to escape, desiring to change the channel or turn off the power switch altogether, and yet recognizing the severe mercy at work that tames his desperation and disarray. It's a lovely, disarming track, the kind of musical marital counseling manual that ought to be required listening for jazz fans and newlyweds alike.

It's serious stuff, to be sure, and yet there is a lightness and grace in these songs that transcends the sometimes portentous themes. In "Progress of Love" Henry moves from the personal to the global for the first and only time, and he addresses that big, blustering nation that so preoccupied him throughout Civilians:

We say "never forget" and mean "never forgive"
No, never as long as ever we live,
It offends our dead to surrender all this,
To even think we might go on --
And freedom doesn't need to be free when it sells
Like ocean waves offered from inside of shells
We bet the farm trying to ring its bells
While love still goes for a song

And just to prove it, he follows that up with with an impossibly romantic instrumental showcase for his son Levon's smoky sax, the kind of smoldering babymaker ballad that Sonny Rollins and Stan Getz used to toss off in the late '50s. It's the perfect antidote to the angst and self-examination, and it suggests some simple truths: Relax. Take it easy. It's nothing that a little candlelight and Merlot can't address.

Such is the genius of Blood From Stars. It's the work of a poetic asshole who is well loved, and grace has the final word. I'm tempted to call it a stone cold masterpiece, but there's nothing cold about it. It's a big, open-hearted, warm paean to the hazards and triumphs of love, human and divine. There's no use separating the two, Joe Henry seems to be telling us. The human is illumined by the flickering light of something better and outside ourselves, and the divine is given substance and form by messy, redemptive relationships. It's the truest album I've heard this year, and the best.
Posted by Andy Whitman at 2:22 PM

Thank you so much for the recommendation! I would have never stumbled across it on my own. A couple of tracks into the first listen and it is stunning!

Cheers and thanks again.

I think Joe's officially taken my top spot as far as artists I can't live without. Another great volume in an incredible body of work. Can't wait to hear more from Levon, too.

just bought it after Clive (earlier commenter) gave me the link. Wow. Would not have heard of him if it weren't for you, so thanks.