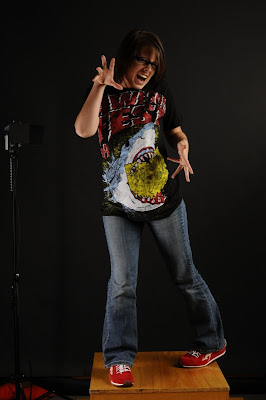 It's that time of year again. Awesomefest '09 takes place tomorrow in environs in and around Columbus, Ohio.

What is Awesomefest, you might ask? Awesomefest is the most awesome of all fests, and involves three distinct activities:

1) Riding a bike
2) Watching lots of movies, and
3) Getting a tattoo

Specifically, this entails riding a bike for 25 - 30 miles, watching the four Jaws movies, and getting an Awesomefest-themed (think sharks!) tattoo. Here's the schedule:

Note that Bike Olympics involve both bike jousting and bike polo. Note too that the final Jaws movie will be shown outdoors, against the side of a building in downtown Columbus, and will be powered via a generator, the juice generated by people (what else?) riding bikes.

And this year the event is bigger and better than ever (okay, it's only the second year, but still ...). People from more than, oh, three states will be participating. Local establishments such as Cafe Brioso, Roll, Paradise Garage, Evolved Tattoos, Seagull Bags, and The Drexel Theater are there to lend a hand. And a writer from 614 Magazine will be there, embedded deep in the heart of the competition, to offer his insights on the wacky proceedings.

The tattoos? Take your pick. They're more varied than ever, too. 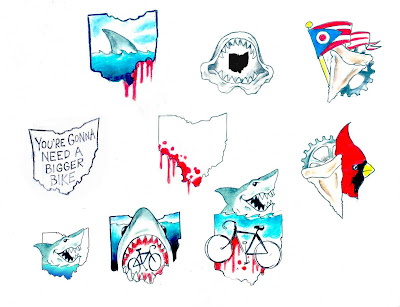 All proceeds benefit Asia's Hope, as worthy an organization as you could possibly find. Get a tattoo. House and feed an orphan. It's a pretty great deal, and beats the hell out of a bake sale. Kudos to Nick Fancher for pulling it together.
Posted by Andy Whitman at 2:28 PM