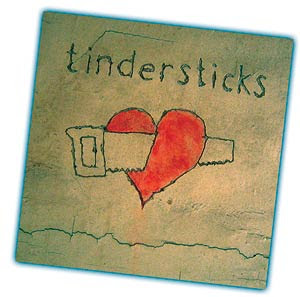 Are there any Tindersticks fans out there?
A brief recap: Tindersticks' eponymous 1993 debut album was named Album of the Year by Melody Maker. Virtually no one bought the album anyway. They released a handful of critically acclaimed but commercially ignored albums on Island Records throughout the 1990s, switched labels around the turn of the decade, dropped old members and added new members, took a five-year hiatus from 2003 to 2008, and released yet another critically lauded but virtually ignored album last year in The Hungry Saw. The Hungry Saw has been on repeat play on the iPod over the past couple of days, and I'm rediscovering what I love about this band.
Tindersticks create a sort of world-weary lounge music. If you're familiar with the music of Mark Eitzel/American Music Club, Lambchop, or the last few Joe Henry albums, you'll have a fair approximation of the sound. There are strings here, and horns, and heavily reverbed guitars, and, in Stuart Staples, a distinctive songwriter and vocalist whose philosophical ruminations rarely rise above a whisper. It's Emo music for adults, and the mopery is based on a deep-seated existential despair. A girl hasn't let Stuart down. The universe has. I can't dwell in that place for very long. I can head down that alley fairly easily, and it tends to have a deleterious effect on the rest of my life. But on certain days -- say, when it's six degrees outside, and grey for the tenth day in a row, and white snow is falling on top of the grey snow -- then this music sounds just about perfect. The Hungry Saw is a good place to start, as is the 2004 compilation Working for the Man, which cherry-picks the best tracks from the first four albums, and where every song is sad and vital.
Posted by Andy Whitman at 9:34 AM

I don't have a lot of their music, but consider me a fan. The first Tindersticks song that I heard was "Travelling Light", which still remains a favorite to this day.

I liked "Curtains" and "Can Our Love..." but haven't heard a whole lot else.

I became a fan of The Tindersticks by way of the French filmmaker Claire Denis. Stuart Staples has been her composer and musical advisor for several years now. His score for Nenette and Boni is probably my favorite Tindersticks album.