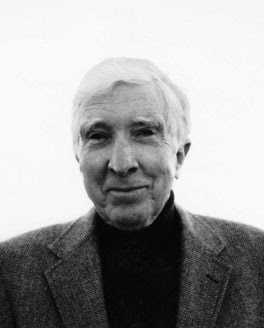 John Updike will always be one of my favorite writers. He wrote a dozen or more best-sellers, and could certainly be accused of pandering to the more lascivious tastes of contemporary readers. But in my mind he was the best writer on sex as commodity in American fiction, and he always brought an icy, contemplative chill to his sex scenes. If you got aroused during this stuff, you just weren't really paying attention.

His lasting legacy will probably be his four Rabbit novels -- Rabbit, Run, Rabbit Redux, Rabbit is Rich, and Rabbit at Rest -- one published at the end of the '50s, '60s, '70s, and '80s, respectively. They were meant to be encapsulations of the American zeitgeist at the time of their writing, and it would be difficult to recommend a more accurate portrayal of the unraveling of America in microcosm.

I had a dad who was very much like Rabbit Angstrom -- former star athlete, insecure romantic, incessant salesman, serial adulterer, insufferable jerk. Reading those novels was like reading my family history. Rabbit was one of the most fully realized and complex characters in American literature, and I still marvel at the ways Updike was able to communicate the many facets of his personality. Now Updike himself is at rest. I'm thankful for his supremely moral vision and his always sparkling prose. May he rest in peace.
Posted by Andy Whitman at 1:54 PM

One of my long-time favorites as well. I missed the news that he had died. May he indeed rest in peace.

His "Seven Stanzas at Easter" was posted on a blog today, to mark his passing.
Rest in peace, expecting the angel.