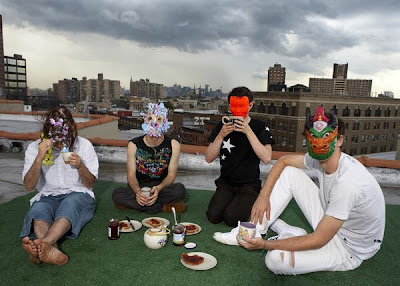 Pitchfork has weighed in on the new Animal Collective album Merriweather Post Pavilion, awarding it a 9.6 rating out of 10. Stereogum ha also weighed in, informing us that this will be the "Best Album of 2009." On January 5th.

LOL. Kudos on the last phrase!

I just don't get the craziness surrounding these guys. Must be something I've missed...live shows, legendary stories, whatever...Its like they could release some abient pop album with nothing but samples of farts and Pitchfork and the like would credit it as the best album since Kid A.

I don't really get it either, Teddy. I think AC are creative. I think they're doing some new things. But they offer a sound that I admire more from a distance. I don't particularly want to spend time listening to the music, you know?

Great to hear about Eleni's new album. In fact I thought her last one was one of the best of 2007. I've always been a big fan and look forward to the new one. Hope she gets some proper recognition. Jeff

I'm a big Eleni fan as well, Jeff. And she's getting a full-page spread and a glowing review in the upcoming issue of Paste, courtesy of me. I hope that constitutes proper recognition. Nothing (well, okay, I can think of a couple things, but still ...) would please me more than if more people discovered Eleni's wonderful music.