The Soul of John Black 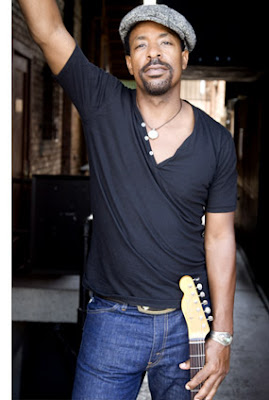 Meet John "JB" Bigham, AKA The Soul of John Black. And hold the Marvin Gaye and Otis Redding comparisons.

The latest crop of retro soul singers -- Anthony Hamilton, Amy Winehouse, Ricky Fante, Adele, Raphael Saadiq, James Morrison, Jamie Lidell, Sharon Jones -- invariably mine the sounds and mannerisms of Motown and Stax/Volt. It's understandable; that's the mother lode of soul music. But it's refreshing to encounter in Bigham a soul singer and songwriter who dials the Wayback machine to radically different eras. Like 1969 San Francisco and the proto-funk of Sly and the Family Stone. Like 1971 James Brown and the blaxploitation soundtracks of Curtis Mayfield and Isaac Hayes. Like 1983 Prince. Like the swamp boogie of 1968 Creedence Clearwater Revival. Like, God forbid, the country blues of 1927 Son House and Charley Patton.

To say that Bigham is heir to multiple traditions is a major understatement. A former member of Miles Davis' band, a cornerstone of the great funk-ska band Fishbone, and session man for everyone from Dr. Dre to Bruce Hornsby, Bigham has used his diverse musical background as a springboard for an exploration of the intersection of blues, rock, soul, and funk. He seamlessly merges influences and eras, and the results can be heard on his fine new album Black John, out February 17th on Electro Groove Records. The groove is, indeed, the thing. It's relentless, and it's enough to get this sedentary, couch-potato white guy off his backside and spasming in suburbia. Look, I try. The lyrics are inconsequential; what matters is the soul and funk, and Bigham brings it on every track. He's a fine singer, too, throwing in Godfather of Soul grunts and gospel melismas and pleading, sexually-charged asides that are worthy of Al Green.
Posted by Andy Whitman at 1:02 PM

I took a little time to research this guy - and you hit the nail on the head. I was greatly pleased by your reference to Son House. If you appreciate good gritty acoustic music and story-telling, I would recommend Tom Evanchuck. If you're interested, perhaps I can send you some.