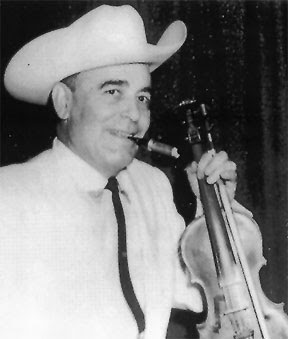 This music is great, although I have to say that Bob Wills has the most annoying vocal tic since Keith Jarrett started moaning along orgasmically to his lovely solo piano work. Wills' trademarked falsetto "Ahhhhh-haaaah" is trademarked a little too frequently. It's kind of cute the first time, mildly annoying the fifth time, and by the five hundredth time I'm ready to string him up by his fiddle strings and sic a team of Swiss yodelers on him.

Musically, though, this is everything I hoped it would be -- cowboy tunes, big band songs from Ellington and Basie, proto rock 'n roll. All of it swings and stomps. There's a guitar player here named Junior Barnard, heretofore unknown to me, who gets such a dirty tone from his instrument that I can't help but think that blues primitivists such as Hound Dog Taylor and, yes, The Black Keys, must have studied this material. It's wondrous stuff, raw and jumping, and it's enough to make me overlook Wills' vocal antics and the dulcet, sweet tones of lead singer Tommy Duncan, who really sounds like he's hankering for a duet with Doris Day.
Posted by Andy Whitman at 1:20 PM

Ah-HAH! Bob Wills was the king. In the 50s and early 60s there were as many bars with live Western swing bands as there are bars with rock music today. I'm thinking of putting on a Bob Wills birthday bash in San Francisco on or about March 6. We've got to introduce people to this guy's music!