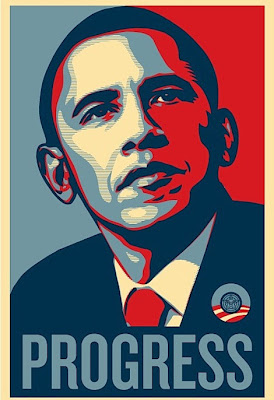 Long before the election of Meester Beeg, AKA President Obama, pundits and other paranoid human beings have been pointing out the similarities between Obama campaign posters and posters from mid-20th century Soviet iconography. Convinced that this was the first harbinger of oppressive governmental intervention (I thought that was the Bush administration, but never mind), many have surmised that we're well on our way to a socialist state. Just look at those posters again.
And perhaps they're right. So in the spirit of collective ownership, I'd like to point out that you, too, can get in on the act. But don't delay, comrades, or you will be sent to gulag! Ees better than borscht!

I was perusing Facebook and found Josh Jackson's Obamicon, then I made my own. One of my facebook friends swiped a photo of Aretha from the inauguration, Obamiconned it, with the word "Hat." It's perfection!

Granted that it's possible to take these things too seriously, but I still maintain that it's creepy to have pictures of a political figure surmounting a word like "HOPE". Someone has got their priorities mixed up.

Gulag, you can have me; I miss borscht. Will there be black bread?

Re: the notion of linking governments with hope:

"It was not the mere matter of separation of the colonies from the motherland; but something in the Declaration giving liberty, not alone to the people of this country, but hope to the world for all future time." -- Abraham Lincoln, 1862

You would think, reading some of these comments, that Barack Obama had invented or subverted the word.