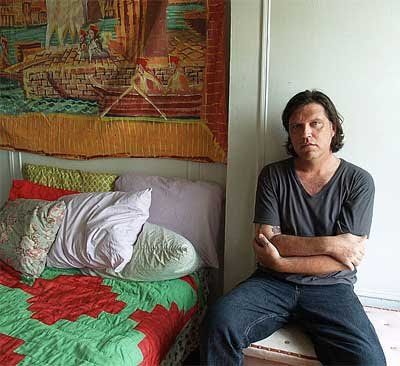 Here's Richard Buckner, looking forlorn, which is one of the things he does best. Sounding glum, too. The guy is just one big ball of angst and despair.

Truth be told, I'm a relatively happy guy. Most days I even kinda like my life, which is one of those things that sensitive artistes are never supposed to admit. I can't help it. Sure, shit still happens, to me and to people I love. But I have a great wife, great kids, a decent job, good friends, and a God who loves me and is changing me for the better. Don't tell anybody. I wouldn't want to blow my cover.

Still, I like a song of abject misery as much as the next sorry sumbitch. Here are a few of my favorites, if "favorites" can still be used to describe music that makes me want to slit my wrists.

And yes, Richard Buckner, whose song "Lil Wallet Picture" is the sound of emotional collapse:

How about you? What's your soundtrack to misery?
Posted by Andy Whitman at 10:05 AM

The Midnight Organ Fight in its entirety, anything by Elliot Smith and/or For Emma, Forever Ago are all up there, but I think my favorite is Miles' soundtrack for Ascenseur pour l'échafaud.

Anything by Joy Division, The Cure, Godspeed You! Black Emperor.

Bruce Springstein "Cover Me" and "Glory Days", Pink Floyd "Comfortably Numb", Edgar Winter "Autumn", The Allman Brothers' Band "Whipping Post", Los Lonely Boys "Heaven", Over the Rhine "Ohio", Spirit "When I Touch You", The Subdudes "Save Me", Van Morrison "When Will I Ever Learn to Live in God", Vigilantes of Love "V.O.L" (the whole CD), The Who "Love Reign O're Me".

I would add to "The Last Time I Saw Richard", "Blue" and "Down to You".
-Bloomed by Richard Buckner
Bill Malonee can be pretty high on the list as well, though his work isn't nearly as absent of hope as some...well, sometimes at least. "Friendly Fire" is pretty rough.
-"Momentum" by Aimee Mann.
-Anything slow by the Tin Hat Trio.
-"Gypsy Girl" Katie Herzig
-"Racing Like a Pro" the National
-"I've Seen it All" from the Dancer in the Dark soundtrack.
-The Dead Man Walking sountrack.
-"How to Disappear Completely" Radiohead
-"In Germany Before the War" Randy Newman
-"Day is Done" and "Riverman" by Nick Drake
- I am a film score geek so The Thin Red Line, Atonement, Shine, The Constant Gardener, The Motorcycle Diaries, American Beauty and the Eternal Sunshine of the Spotless Mind all have songs that I would add to the list.