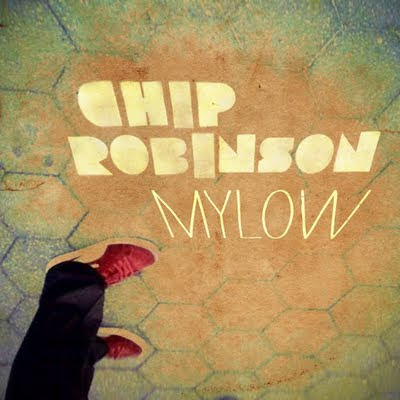 Chip Robinson's debut solo album Mylow just might be my pick for Roots album of the year. Chip was the head cowpoke in Raleigh, NC's The Backsliders. Their two late '90s alt-country albums arrived at the same time as local cohorts Whiskeytown's Faithless Street and Stranger's Almanac, and Ryan Adams, notoriety whore that he is, got all the pub. It's too bad because I always thought The Backsliders were the better band, and Chip Robinson the better songwriter.

So, eleven years went by. Chip's band got dropped by Mammoth, and he disappeared from rock 'n roll and lived a sometimes dissolute life. It's a familiar story. But he's come back with a beautifully written and worldly wizened album that owes more to Tom Waits and Townes Van Zant than the often moribund alt-country scene. The voice has lost some of its twang but acquired several layers of grit and soul along the way, and although there are still several raw, stinging rock 'n roll tunes here, the album as a whole has a decided air of wistful vulnerability and sorrow and loss about it, stories of screwing up and finding redemption amidst the mud and the muck. In other words, Chip has recorded my favorite kind of tunes. "The day I fell in love with you I pissed off my wife and my girlfiend too," Chip sings on the rueful "Fence," and you get the impression that he's not singing the usual, run-of-the-mill cheatin' song.

There are some wonderful sonic juxtapositions on this album -- the raw but hopeful uptempo title track is followed by the accordion-driven dusty two-step of "Mylow Dreams," which sounds like it could be a hit in Paris, Texas or Paris, France. The pensive folk dirge "Wings" gives way to the raging "Beesting," which barrels out of the speakers like The Drive-By Truckers. There's a superb cover of Ronnie Lane's all-but-forgotten gem "Kuschty Rye." And he wraps it all up with "Wishin' on the Cars," one of the sweetest lullabys you'll ever hear:

He goes on like that for a few more verses, mixing metaphors like some kind of crazed lingusitic bartender, but the resulting concoction is so transparently heartfelt and lovely that it doesn't really matter. Call it whatever genre you like -- alt-country, folk, roots rock -- it all fits. But this is the sound of honesty and somebody who knows how to articulate the deep groanings of the heart. Those albums are rare in any form, and this is a superb comeback.
Posted by Andy Whitman at 11:49 AM