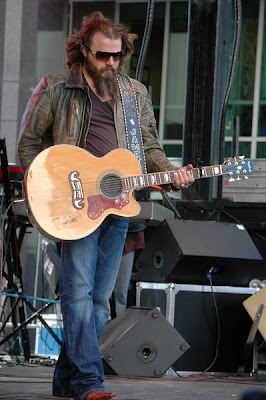 Jamey Johnson has a new, as yet untitled, album, or maybe albums, coming out soon. And it's all quite confusing.

Here's what I know: I've heard these 25 songs, spread across two CDs, and they're superb. I've written about Jamey before, and not much has changed. He still looks like a Hells Angels biker and he still sings like a Redneck Angel, equal parts Waylon Jennings and George Jones. He has a voice for the Heavenly Honky Tonk. Set 'em up, Jesus, and give me a double shot of redemption and grace. Better yet, his songwriting invests the most cliched country music subjects with freshness and authenticity. He's been to hell and back, and he'll tell you about it, but he does so more as a confessional singer/songwriter than as a Stetson-hatted hack. His 2008 album That Lonesome Song was about as good as country music gets, as far as I'm concerned.

So ... there are two albums here, one called Black and one called White, both possibly part of a larger concept album called The Guitar Song. Apparently it's still up in the air. Black is a song cycle of drinkin', druggin', cheatin' and generally pissin' life away, while White seems to offer some glimmers of hope. Take 'em together and they tell a story of redemption. Take 'em separately and there are about a dozen tunes here that deserve to be huge hits, and would considerably improve the fare heard over the radio.

I dearly love this guy. I'm fairly certain that anybody who loves George, Waylon, or Merle would love him, too.
Posted by Andy Whitman at 10:44 AM

Andy, would it be possible to post a track list for the 25 songs you listened to? I'd love to hear the names of the new songs for the two concept albums. If this would be ok, that would be cool. Thanks.

The 2-CD set is indeed called "The Guitar Song." There are several covers up there that may ring a bell, most notably Mel Tillis' (by way of Waylon) "Mental Revenge" and Kris Kristofferson's "For the Good Times."

Thank you so much, Andy! I can't wait for the CD to come out.