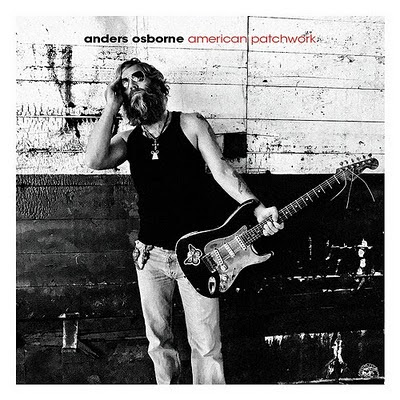 If I was running the universe, Anders Osborne would be in heavy rotation on WHIT, the radio station that would forcefeed you only the best, and that would be piped into your lives 23 hours per day (leaving one hour for prayer and family and other important stuff; screw the 9 to 5 routine). He can play the gutbucket bluesman and hot guitar slinger, and he can play the sensitive, soulful singer/songwriter, and he's excellent at both. His latest album American Patchwork, his first for venerable blues label Alligator Records, has predictably been released to nearly deafening silence. I don't get it. The guy is a triple threat as a singer, songwriter, and instrumentalist, and he's consistently overlooked. Other than Thom Jurek (whose fine review of this album is right here), I'm not sure if anybody is paying attention.

And it's too bad, because I defy you to find two songs as widely different and as stellar as "Darkness At The Bottom" and "Call On Me" on any album released this year. The former is a shrieking blues monster with an overamped slide-guitar hook so menacing that hardened criminals would quake in fear, and the latter is a pensive, literate acoustic love song that puts Anders in the company of sensitive folkies like Paul Simon or Jackson Browne. Mastering either genre puts you in select company. Mastering both is mind-bogglingly great.

Not every song is that good, and a couple of these tunes devolve into somewhat generic blues stomps. But those two tracks, along with a handful of highly personal, idiosyncratic reflections on addiction and the toll it takes on every aspect of life, turn this album into something very special. American Patchwork is emblematic of Osborne's adopted city of New Orleans. It's soulful, wildly diverse, and keenly attuned to the seductive pleasures of Bourbon Street and the rueful regrets and recriminations of the morning after. It's thoughtful blues and raw, scorching singer/songwriter fare. It's one of the best albums you've never heard.
Posted by Andy Whitman at 10:05 AM

Andy, I sure am grateful for your blog. A while back you helped me discover Joe Henry, and now Anders Osborne as well. I've already picked up Ash Wednesday Blues and Coming Down and love both. I'm really looking forward to getting American Patchwork. Thanks for highlighting some really great music that deserves much wider recognition.

You're quite welcome, Jake. I'm glad my blathering has been helpful.

So I've never really listened to blues type music before, probably because I'm lame and tend to stick with my fast-paced psychedelic rock style. However, I took a shot with this, and I am very impressed. This could be the start of something new for me.

By the way, I am going to be writing for my university's school newspaper, particularly about music and so and so forth. This is my first experience in doing so, and I really like reading your stuff. Any advice?

So glad to hear Anders is still making good music. He came through Tallahassee once or twice when I was at FSU in the early- and mid-90s, and I remember being so thrilled to finally find a singer/songwriter/guitarist who clearly loves Lowell George as much as I do. I haven't heard anything he's recorded since then, but I'll be sure to queue him up today.