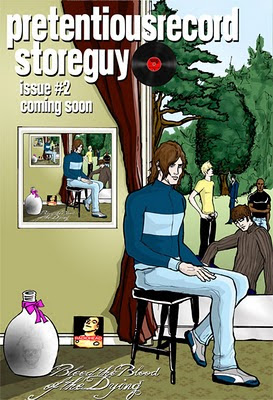 Anybody know which semi-famous album cover that cartoon is imitating?

I wrote about Bela and his blog about a year ago, right here.

Bela's a good dude, and an asshole, like most of us. But the good dude is in the ascendancy. In any event, he's pretty much wrapped up his epic tale of Ohio indie rock and debauchery. Maybe you had to be here, or have lived in the general vicinity of the God-forsaken neighborhood. But his blog has been a never-ending source of musical enlightenment and spiritual truth for me, although I have no idea what he precisely believes. I do know that I nod my head a lot when I read his words:

Jerry passed away in January, it was fitting that his death arrived amid snow drifts and the general crappiness of Ohio weather. Where the general mood is “what the fuck else can go wrong”, where many people tend to take the weather personally as another gray filled day is an act from God, exacting one more piece of a bruised soul. Anyway, this was how I felt when Jerry died, I had suffered from depression for many years and the old ways of dealing with it were drying up as much as I was trying to keep them wet. The music scene was changing for me, and much of my hopes in bands and artists were being vanquished by the personal choices the musicians were making. Jenny was living in Florida, having given up her music career as she stood on the brink of minor-celebrity in the indie-rock world, Moviola had shrunk from the favors of major-label overtures in favor of children and home buying, Appalachian Death Ride had basically ceased to exist as members battled their own demons, only the New Bomb Turks were still making music. Jerry was dead and I felt my life was now being defined by loss.

When my daughter was born, I wanted to show Jerry this fine frail creature that was at once a part but also completely separate from my being that I helped make. He would have cooed at her, as his own vulnerability touched her own and she would smile back at his adult goofiness. He loved Tom T. Hall, as I do, and we would both sing “Sneaky Snake” together, Jerry would sing it with a lisp making the ridiculous song even more ridiculous. Today, it is permanently on my MP3 player, painful as it is upon the four hundredth listen but I smile at Jerry bobbing his head to it, envisioning him singing it to my children. My son turns two this month, a gorgeous blond boy with curly hair that captures light and absorbs the sun into his being. He is a testament to all that I couldn’t do but was willing to risk; the children an honor to two friends who stepped over the line and never quite came back.

This is some rare wisdom from the obnoxious guy who hangs out in every indie record store. You know him. It's very much worth reading his blog, and getting to know the real human being.
Posted by Andy Whitman at 1:11 PM

Ummagumma. As in, "Ummagumma leave this message."