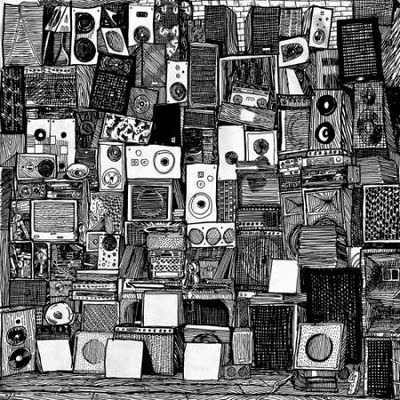 At the very least, that title ought to win Palindrome Of The Year.

But as it turns out, the album is pretty good too. Nada Surf will forever be cursed by their association with their one and only hit, 1996's "Popular." But the truth is they've gotten a lot better over the years, and the past decade has seen them churn out one power pop gem after another. If I Had a Hi-Fi is the semi-obligatory covers album that every indie band seems compelled to dispense with mid-career. But the covers range from totally obscure (The Mice, The Silly Pillows) to mostly obscure (The Go-Betweens, Dwight Twilley) to well-known-but-willfully-eclectic (Kate Bush, The Moody Blues, Spoon, Depeche Mode). All of them get the same treatment -- jangly Byrds guitars, a few power chords to add some needed punch, and airy three-part harmonies. Hey, it's worked for Teenage Fanclub for a couple decades now, and if the idiosyncracy of the original songs and artists gets lost somewhat in the jangle, it is nonetheless some very sweet jangle. Fans of the early Byrds, The Posies, and, above all, mid-'90s Teenage Fanclub, should snatch this one up quickly.